The only thing anti-poverty programs are missing is the long arm of the law? 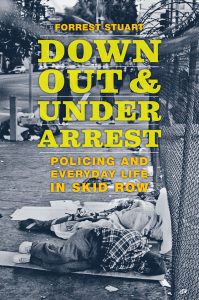 In a minute I’m going to get to a great new book on U.S. poverty and policing. But first I have to digress. You’ll see where I am going in a minute.

Overly paternalistic poverty programs give me a nails-on-a-chalkboard feeling whenever I see them. These are the programs that assume someone will go full speed into self-destruction if they don’t have their hand held with every step. The telltale sign is a huge staff of well educated idealists whose main job it is to lecture poor people on how to be more like them.

Partly I don’t like the paternalism on principle. (This is my old college-age libertarian self speaking.) And partly I don’t think this paternalism is particularly effective. But then what really galls me is that these staff cost a ridiculous amount of money, and so many more people could be helped if we did away with the paternalism. It’s hard for me to believe the paternalism is worthwhile. How many desperate people never got help because it came tied to such an expensive helping hand? What a crime.

Now I see it could be worse. What if the police got involved, using the threat of arrest to push someone into a mediocre social program? What if the state gave cops the power to fine people for the tiniest infractions, and the cops used every one of these stops and fines  to play social worker and tell the poor soul where they should go to get help? What if the paternalistic NGOs with half-baked programs but great intentions hooked arms with the state to turn policing into their intake process?

That is the situation in LA’s Skid Row. According to Forrest Stuart, that’s actually the new policing paradigm sweeping US cities.

Forrest is my new colleague at U Chicago, in the sociology department. I’m meeting him for the first time later this week, so I decided to buy his book, Down, Out & Under Arrest: Policing and Everyday Life in Skid Row. I did not expect to get haunting ideas of what anti-poverty programs could become in the places where I work.

Policing in America’s poorest neighborhoods used to be a problem of neglect. Police simply managed the rabble and gave real policing to the good neighborhoods. But as crime rose in these neighborhoods, rabble management gave way to intensive policing with zero tolerance. Stops and frisks became the norm. Tickets and arrests rained down on offenders (and non-offenders) to signal the state was back, and not to be messed with.

Since old wealthy white people like me know about the problem, that means it’s old news.  Forrest’s book is about the latest shift, from zero tolerance policing to what he call therapeutic policing. He spent five years hanging out with both sides, the rabble being managed and the police themselves. What he found were cops who wanted to make a difference in these communities, who could use the power to arrest or ticket for good.

Lounging on the sidewalk? Here’s a ticket that will get forgiven if you enroll in this rehab program. Jaywalking? I could arrest you or you could go visit a counselor at the non-profit next door.

I can see how this would be persuasive to the police. Who doesn’t want to help someone improve, and be a part of that process? I can also see how this is persuasive to the non-profit. When you work with poor people, it’s incredibly difficult to see people leave. It’s painful to see them fail. And it’s tragic to think it could have been avoided. Especially if you just had a little more time.

Unfortunately I doubt this approach works. And even if it did, the college Libertarian in me joins forces with the grad student who read just a little too much Jim Scott, and the professor who has seen too many middling but expensive anti-poverty programs, and rebels against the coercive state and the forces of paternalism.

Thinking about it, what’s surprising to me is that I haven’t seen this police-NGO marriage in the places I work. Lots of the Ethiopian, Ugandan, Liberian and Colombian leaders I know would like this idea. This makes me think it’s only a matter of time before the enthusiasm spreads. How long before microfinance programs and vocational training come backed by the law?