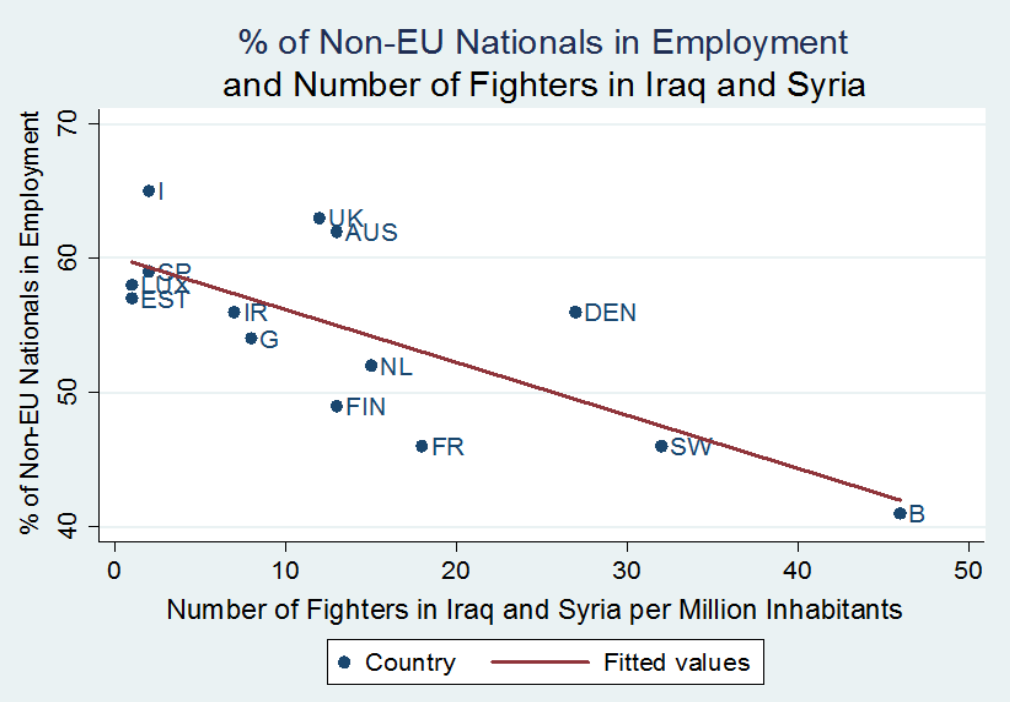 Yes and no, says Philip Verwimp, a Belgian economist who studies violence. The graph above plots non-European-born employment levels in Europe against estimated ISIS recruitment. Way over on the right, B is Belgium.

[Note: See updates from Philip Verwimp at the end]

While the foreign-born cannot get jobs, Belgian nationals can. This graph shows that Belgium has the biggest employment gap between nationals and non-European-born in all of Europe:

You might think this is an unemployment-causes-violence kind of argument, but it is not. It’s possible, but Verwimp knows that this runs against most of the evidence, which finds little association between poverty and violence.

Belgium has a very elaborate welfare state. All citizens have health coverage, schools and universities charge no or few fees, child benefits, unemployment benefits, pensions, are all in place. But this comes at a cost of a closed labour market, meaning a labour system that heavily protects those who are in, but makes entry for newcomers very difficult.

It does not seem to be poverty, but exclusion. Philip wrote to me:

One of my students from African origin, graduating from our MA program, told me (before the Paris attacks) « it is easier to get unemployment benefits in Belgium than to get a job ». He decided to move to Canada. That summarises it. Migrants and their families have full access to the allocations of the welfare state, but face daunting challenges when they want to get ahead in life.

…I am not looking at individual factors to join IS, as young adults across European cities many share similar reasons, but for ‘structural’ factors that make the situation different in some countries compared to others.

Why is there exclusion from labor markets? Verwimp argues it’s not all education or other selection. In their work on France, Adida, Laitin, and Valfort have made a persuasive case that it’s discrimination, though it might be discrimination on where you’re from rather than anti-Muslim feelings. [Actually, this may have been an error of mine—see below]

Another possibility I find quite plausible: the shame and injustice of exclusion, not poverty, is what leads so many to rebel. This is possibly one of the hardest propositions in social science to test.

If you want to read all the evidence I know, here is my review of the employment and violence literature. It is a work in progress, so comments welcome.