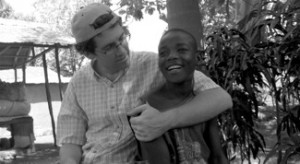 That is the subtitle of my brother Kent’s book on his first years living in rural Haiti, just released. In my (biased) opinion, it’s among the most thoughtful memoirs on the struggle to live a life of service to others while still seeing to yourself. And your marriage.

Kent and patient wife Shelley lived a life unlike the usual NGO worker. In their organization, you live nine months with a family doing nothing but live and work like a rural Haitian before they let you anywhere near a development project. Like most Haitians, Kent barely speaks a word of French. But he can soliloquize in Creole.

Events in Haiti seem much closer now having read the book again in the past two weeks. If you are touched by recent events, consider reading it.

The title of the book? Following Jesus Through the Eye of A Needle. Kent’s a theologian by training, a liberation theologist (of sorts) by inclination. I, meanwhile, am the agnostic social scientist. (The philosophical discussions that grace holiday dinners are interesting.)

By its title, this is not a book many of my readers would normally buy. That is too bad. Kent wrestles with questions that confront any rich do-gooder in a poor nation, regardless of creed. It changed the way I think about my place in a foreign land.

Actually, I say not many readers might normally buy the book, but one of my greatest prides is that (judging by who links to me) my blog is read as much by evangelicals and conservatives as it is by leftists and atheists. The do gooders of the world have united, at least under one RSS feed.

Academia is a bubble. I am surrounded by (philosophically) like-minded folks. Heck, during the Presidential primaries, I barely knew any Hillary supporters, let alone Republicans. Marrying into a family of theologians (of diverse creeds) has been one of the unexpected intellectual joys and challenges of my life. Especially when, like me, they are a family dedicated in whole to public service. Kent’s book is a piece of that experience.

I hope you’ll check it out. His development NGO, mentioned earlier this week, is here.