The main problem with living on $2 a day… 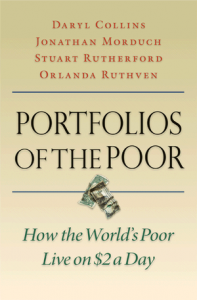 For the world’s poor, income comes in spurts. Cash flow is a disaster. The danger and frustration of this is apparent even to us rich middle class folks–I no longer worry about bounced rent checks, but it wasn’t so long ago that I had such concerns.

Of course, I could borrow from family, a credit card or (more often) a student loan.  What’s a poor person to do when all the money comes at harvest, or all the money goes for a funeral or wedding?

That’s what four academics set out to learn in Portfolios of the Poor. I read the book last year, and listened to two authors (Jonathan Morduch and Daryl Collins) on a Development Drums podcast last night.

Their approach is an unusual one for economists. Teams of researchers sat down time and time again with a small group of poor in Bangladesh, India and South Africa. Each visit they would chronicle the cash coming in and out, and where their money was saved, borrowed, lent, or hidden. Unconventional to be sure, and not representative like a survey might be, but insightful nonetheless.

The central finding: cash management is even more important for the poor than it is for you and me. Every household had both savings and debt, and often those savings and debt were scattered about 4 or 5 or 10 different people and places. They spread out their risk. This built a portfolio of the poor.

Unfortunately, they’re miserable about it. Informal financial obligations are unpleasant and insecure, but the poor don’t have any alternative.

This raises an important point: people value microfinance even if it doesn’t lead to rising incomes and development (like some recent evidence might suggest). They like it because microfinance helps them manage their day to day cash problems without the messy social obligations or discomfit. They want their financial intermediation to be impersonal.

It’s a nice point, convincingly made.

Problems with the book? There isn’t much discussion of fixed assets, which are probably the most important saving (and income-generating) strategy for the poor.

Also, they don’t get into the evidence to support (or question) some of people’s more curious financial actions. This would have been a nice place to introduce a lay audience to behavioral finance.

Last, the argument would be stronger if could marry survey evidence with the ethnography. Even if it weren’t their own data and findings.

Otherwise, it’s highly recommended for the micro-development folks out there.

It’s also a lesson to us quantitative researchers: that mini-ethnography can be as informative and convincing as survey data, usually in a complementary way. On three randomized evaluations I now have full-time local ethnographers collecting and transcribing a year of interviews. I hope my results are as insightful.