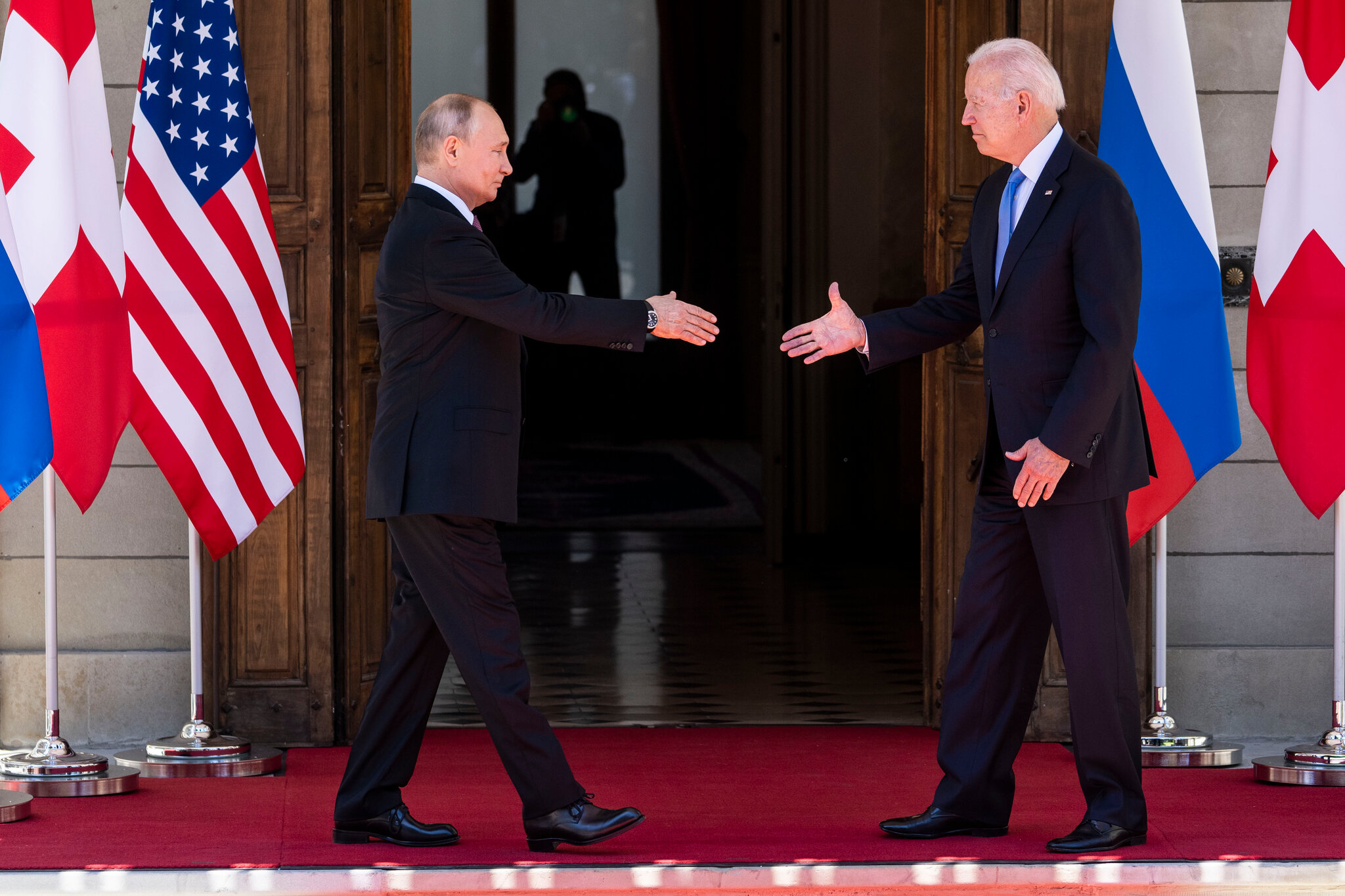 That’s the title of my feature with RealClearDefense, published this weekend. Full text follows here.

The Biden administration has worked hard to keep Russia from treating America as a co-combatant in Ukraine. But that doesn’t mean NATO isn’t deeply embroiled in the fight. The level of support is extraordinary and increasing, including sanctions, intelligence sharing, weapons transfers, and money. Add to that the ever-heightening political rhetoric: “The United States is in this to win it,” one US Congressman tweeted from Kyiv.

But nothing in international law stops Russia from changing its mind and treating the United States as an active party to the conflict. Instead of providing bright red lines, the conventions are fuzzy and subjective. The fact that Vladimir Putin hasn’t deemed NATO a co-combatant comes from a mix of murky international norms, strategic calculation, and luck.

At some point, that could change. Perhaps a Ukrainian military unit uses a long-range system from NATO to attack Belgorod, just inside the Russian border, and Putin orders his military to retaliate against a Western country. Or, as the torrent of heavy weapons to Ukraine grows, perhaps Russia decides that supply depots in Poland are fair game. We can imagine these scenarios by the dozen.

In all likelihood, however, none of these will come to pass. Fighting is ruinous, and so, as a general rule, countries do their best to avoid open conflict—especially one that could go nuclear. The costs of war also mean that (when they do fight) nations have powerful incentives not to escalate and expand those wars—to keep the fighting contained. This is one of the most powerful insights from both history and game theory, and the subject of my recent book, Why We Fight: The Roots of War and the Paths to Peace. War is a last resort, and the costlier that war, the harder both sides will work to avoid it.

For the most part, that logic holds here. The United States and Russia have an exceedingly low risk of conflict. But that risk is not zero. In their vociferous support for Ukraine, it’s important for American politicians and their publics to be clear-eyed about the perils involved. It’s not just that NATO could get unlucky, and see the fighting escalate for idiosyncratic or irrational reasons. Game theory and history show us how NATO or Russian aggression could come about for rational, calculated reasons.

Before we get there, however, let’s go back to why a Russia-NATO war is unlikely. The conflict in Ukraine makes this a strange moment to argue that war is rare, or a nation’s last resort.

A powerful example came two weeks into Russia’s invasion of Ukraine, when India accidentally launched a cruise missile at Pakistan. Predictably, calm ensued—as it has for decades. War between the two hostile, nuclear-armed rivals would have been so unimaginably costly, both sides strove to avoid it.

For years, Putin also avoided invading Ukraine. Instead, for two decades he tried every other underhanded means possible to co-opt the country: dark money, propaganda, political stooges, assassinations, and support for separatists. He tried everything else he could because as violent and costly as these things were, not one of them was as risky or as ruinous as war.

Likewise, Putin successfully pacified Russia’s other neighbors with varying degrees of persuasion and force, from the subjugation of Belarus to “peacekeeping missions” in Kazakhstan (to say nothing of the cowing of the Russian people). None of these confrontations required long campaigns of violence.

Finally, once the war did break out, both sides took steps to avoid escalation. Russia has the missiles to level every government building in Ukraine’s capital, but they haven’t done so yet. And while it’s hard to look at the recent attack on shoppers at a mall in Kyiv and see evidence of restraint, the fact is that Putin has the ability to do much worse. Similarly, Ukrainian forces could step up their attacks across the Russian border, but have kept these incursions to a minimum. Each one of these choices is likely to be a strategic one—a decision to concentrate the fight to the Donbas and reduce the costs and risks of escalation. A war between NATO and Russia would be more costly than all these conflicts put together.

Escalation is unlikely, but every day the war rages on means a small chance of world war. Some of this risk is idiosyncratic or even irrational. A NATO or Russian officer could misread the situation, or a computer system could produce an error, and one side mistakenly launches an attack on the other. Even if they’re unlikely, such events are easy for most people to imagine.

Less evident are the strategic reasons that one side could decide war—whatever its price—is worth the gamble. There are at least three ways this could come about.

First, there is the logic of reputation and deterrence. NATO has incentives to be confrontational with Russia—to take excessive risks in supporting Ukraine—to deter future adversaries. That’s because every one of NATO’s other rivals is watching and drawing lessons. If the West treats Russia gently, just because it is a nuclear-armed power, that sends a clear message to every other strongman in the world: atomic weapons are the ticket to impunity; get them as soon as possible.

To avoid this signal, America and its allies would have to be willing to show that they are willing to stand up to a nuclear armed state and endure some chance of escalation. This would mean taking more risks than in a world where NATO only has to think about Russia. Sadly, no rivalry exists in isolation.

Second, Ukraine or NATO could unwittingly give Russia an incentive for a preventive strike. Suppose Ukrainians concentrate their forces and heavy arms, tempting Putin to use a tactical nuke while he can. Or perhaps the West pledges to deliver even heavier arms onto Ukraine, but those systems will not be operational for months. This could give Russia an incentive for an aggressive push to encircle Ukrainian forces, cut off Western supplies, and attack NATO supply depots while they can.

In both circumstances, Russia has a window of opportunity in which it believes it is temporarily strong. Quick action can lock their advantage in—an incentive to escalate the war, even if it risks drawing NATO into the fight.

Now, in theory, Russia could use their momentary advantage to demand concessions rather than escalate. As a rule, adversaries prefer to bargain rather than fight. But doing so could undermine the secrecy and effectiveness of a preventative strike. And besides, how could Ukraine and the West credibly commit to those concessions? Once Russia is weaker, its adversaries may have incentives to renege. This is what international relations scholars call the “security dilemma”, and what game theorists call a “commitment problem”—arguably one of the most common but underappreciated causes of war in history.

Third, the last rational road to war involves canny leaders with incentives to rile up public opinion against certain kinds of compromise, only to find that they’ve overshot the mark, and eliminated any possibility of a peaceful deal.

Suppose, six months from now, the war of attrition has ground on, leaving Russia in control of large swathes of the Donbas, where Ukraine has little chance of regaining them by force. Imagine that, privately, the Ukrainian government believes that some kind of settlement is necessary. Optimistically, they reason, Russia might withdraw from the Donbas in return for the region’s autonomy, Ukrainian neutrality, and formal annexation of Crimea.

Unfortunately, it is easy to imagine a world where Western and Ukrainian public opinion is against such a deal, even if it is the pragmatic path. As a result, Ukraine’s parliament could not be trusted to implement any peace deal. NATO membership—enshrined in the Ukrainian constitution—would be even harder to change. Amidst this opposition, Western leaders would feel pressure to publicly distance themselves from a peace agreement they’d secretly like to see. This could pit Russia and Ukraine in a forever war—a permanent festering wound—one that could escalate into a NATO-Russia war for all the idiosyncratic and rational reasons above.

Why would leaders in Ukraine and the West ever find themselves in such a predicament, where the sensible path is anathema in public? Many reasons, but one is because public opinion is a weapon and a bargaining tool. Clever politicians know that they can foster public anger to build broad support for recruitment, taxes, and other costly sacrifices needed to wage the war. This strengthens the government’s hand against an enemy. What’s more, riling up public opinion can shut down a whole range of deals that are unfavorable to your side. “I know it makes sense to concede what you ask,” you can tell the rival leader, “but look at public opinion—my hands are tied.” In short, leaders on both sides of a war have incentives to demonize the enemy and manufacture discontent.

Unfortunately, a few wrong choices and politicians may find they’ve shut off any possibility of a deal—especially if the other side has been playing the same risky strategic game. Suddenly, by month 12 of the war, both rivals are exhausted, depleted, and yet unable to find peace.

For Western leaders, these three logics mean there will be hard choices ahead.

On deterrence, it means working to strengthen Ukraine’s position in ways that minimize the risk of escalation. The Biden administration’s caution against no-fly zones, or long-range weapons that can reach into Russia, seems well warranted.

When it comes to security dilemmas and other commitment problems, it means no moves that give Russia reason to believe its advantage is enormous and temporary. Public declarations of massive military support months down the road could be worse than no declaration at all. Swifter, steady support is wiser.

Finally, leaders should be wary of whipping up hostility to any deal. “In it to win it,” plays well on Twitter and cable news, but ignores that few wars ever end in decisive victory. Almost all require painful concessions. Resoluteness in public is reasonable, but it is also time to assess what kinds of settlements Ukraine’s leaders foresee, and not undermine them in advance.