Why I think the west should support Ukraine big time, but also why we shouldn’t ignore the risks 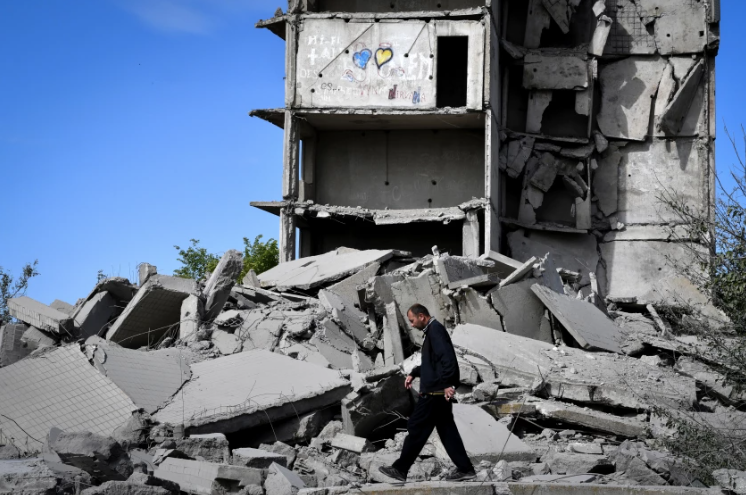 It’s easy to see the war in Ukraine as a sign of an inescapably violent world. But if the future looks bleak, perhaps that’s because we focus on the conflicts that happen and overlook the gravitational pull of peace.

An example came on March 9, two weeks into the Russian invasion. Shortly after sundown, India accidentally launched a cruise missile at Pakistan. Predictably, calm ensued. Both sides strove to avoid escalation — as they have for decades.

Focusing on the times peace fails is a kind of selection bias, one that makes us think that war is more common than it really is. The India incident is a good reminder of a simple fact: War is so ruinous that enemies prefer to loathe each other in peace.

That is my op-ed today in the L.A. Times. I really do think the ruin of war is a useful lens to look at conflict. It also helps us see how this conflict might end, why it might end faster if NATO is unconditional in its support for Ukraine, and why I think that stance is worth the great risks it entails. First, the rest of the op-ed:

Even Vladimir Putin, author of the world-changing conflict in Ukraine, tried to avoid war in his own insidious way. For two decades, he employed every underhanded means possible to co-opt Ukraine: dark money, propaganda, political stooges, poisonings and separatist support. He did all of that because, as vicious and costly as these things were, not one was as reckless as war.

I’m not pointing all this out to downplay the horror of Russia’s invasion of Ukraine. Putin’s brutal war deserves our utmost attention. But it would be misleading, not to mention demoralizing, if we did not also consider the pull of peace. More important, the two together will give us insights into when and how the current conflagration might end.

First, why did Russia invade? Every answer to “why we fight”’ is an example of a society or its leaders ignoring the terrible price that will be paid. Putin, isolated and insulated, apparently underestimated the uncertain costs of invading Ukraine. Also, as a dictator, he knew he wouldn’t have to pay most of them (his people would). And he appears willing to endure whatever costs he will bear to achieve his particular ends: personal and national glory, plus self- and power preservation — eliminating a democracy on his front doorstep.

In the end, however, the expense of this war will be a powerful incentive to limit the fighting. The most visible costs are the tens of thousands killed, and the cities turned to rubble. Less obvious, but crucial, are the treasuries being drained on both sides.

Berkeley economist Yuriy Gorodnichenko estimates that Ukraine requires half of its pre-war monthly national income to continue the conventional war it has been fighting. Of course, Ukraine is earning nowhere near this amount. And even if its factories and fields were producing at full tilt, the country cannot bring those goods to market — the Russian occupation of Mariupol and its blockade of other Ukrainian ports means few goods get out.

Russia has the deeper pockets, but its price of fighting is still exorbitant. One Russian central banker believes the consequent recession in his country will be as deep as its post-Cold War economic collapse — only worse, because the recovery will be slower. Should the fighting persist, he predicts “reverse industrialization.” That is bad news for a president who built his popularity on delivering prosperity. It may be why Putin did not use his May 9 Victory Day speech to escalate the conflict.

The costs on both sides could mean the Ukraine war will be counted in months not years. Even so, bargaining power in the months ahead will lie with the side most willing and able to pay war’s monstrous price. This means Ukraine’s allies, chief among them the United States, will be facing fraught decisions as the fighting goes on, with complicated strategic dynamics — few of which are being publicly discussed.

Looking forward, Ukraine’s economy cannot support an indefinite conventional war on its own. Insurgency is an option, but sustained regular warfare probably hinges on the West’s willingness to help cover the bill. If so, NATO’s resolve (and money) will help shape the length and brutality of this war.

As long as Putin believes Russia’s military and treasury can outlast Ukraine’s, he has an incentive to wage a war of attrition. NATO could counter this incentive. A firm commitment now to pay and keep paying for the war could undermine Russia’s plan to wear down Ukraine, hastening the end of fighting.

The flip side, however, is that Western hesitancy or ambiguity about its support could coax Russia back toward that war of attrition. The U.S. just committed $40 billion to Ukraine. Britain added a further £1.3 billion ($1.6 billion). By Gorodnichenko’s numbers, that’s equal to about six or seven months of Ukraine’s war bill. Will that ratchet up the costs enough on Putin? Or will the West need to go further?

If only “back Ukraine at all costs” were a simple and safe choice. Peace may exert a gravitational pull, but that does not mean nothing escapes its orbit. If Russia mistrusts Western resolve, misperceives the threat or is ideologically intent on takeover anyway, the fighting could be long and intense. NATO could find itself supporting another forever war, one with a small but scary risk of escalation between NATO and Russia.

We must support weapons, financial aid and debt forgiveness for Ukraine in this time of need, but let’s be clear-eyed about what it means to send a firm and committed signal. It means that six or seven months from now, if Putin hasn’t backed down, the West’s unity and passion cannot wane. Should we waffle or equivocate, the highest cost of ongoing war will be borne by Ukrainians.

A few things are difficult to get across in 900 words.

First, I think there is a “shit or get off the pot” decision to be made here. It seems to me that NATO either needs to commit to supporting Ukraine or not. Because the middle ambiguous ground just drags things out and potentially makes Ukraine worse off than if the West abandoned them now. I don’t think abandonment is the path the United States or Europe should take. I’m just pointing out that getting distracted or tired of supporting Ukraine in 6 months has consequences.

Second, a lot of people make bold pronouncements about support for Ukraine. My op-ed does, in some ways, because it’s basically impossible to avoid in that process. I hope I conveyed some of my fears. No such decision should be taken lightly. Especially when others bear the cost.

Third, why do I think this is the right choice? I have several reasons, none of which I’m certain about. But I think they are all probable enough that it’s worthwhile supporting Ukraine.

1. Legitimate concerns that any settlement conceding territory to Russia would simply give Russia time to regroup and try again for more, or embolden the country on other fronts.

This is a commitment problem story that is rooted either in

I’m not sure either of these claims is likely. But they’re not ignorable.

2. While I’m generally inclined to peace, I’m also inclined to let any ally decide when they’re ready to stop fighting for their sovereignty. Ukrainians are showing themselves to be fairly intransigent right now, refusing to accept Russian territorial gains, and willing to go on the offensive to reclaim territory, at least for now. Offense is typically harder than defense, so we will see where public opinion stand in 6 months. But I’m inclined to

3. Generally Putin and his regime is a really dangerous force, and although war is almost always bad for every reason, him expelling strength and political capital on trying to conquer an intransigent people probably weakens him. This has its own dangers and risks, but on balance seems like it is not a bad thing.

4. I think the longer this goes on, especially as Ukrainians and the West set an example of ideological intransigence against autocratic invasions of democracies, that there is a powerful deterrent effect for ambitious autocrats in future.

Again, none of these four is particularly certain, and all could backfire, so some trepidation is in order. Supporting Ukraine with arms and money is a grave and risky decision, even if I think it is the best one under the circumstances.