Dmitri Alperovitch asks how Ukraine will pay for its war if it cannot export in this thread:

Let’s talk about the state of the war and one of the most underreported yet crucially important issues:

The full thread is worth reading but here is the key part: 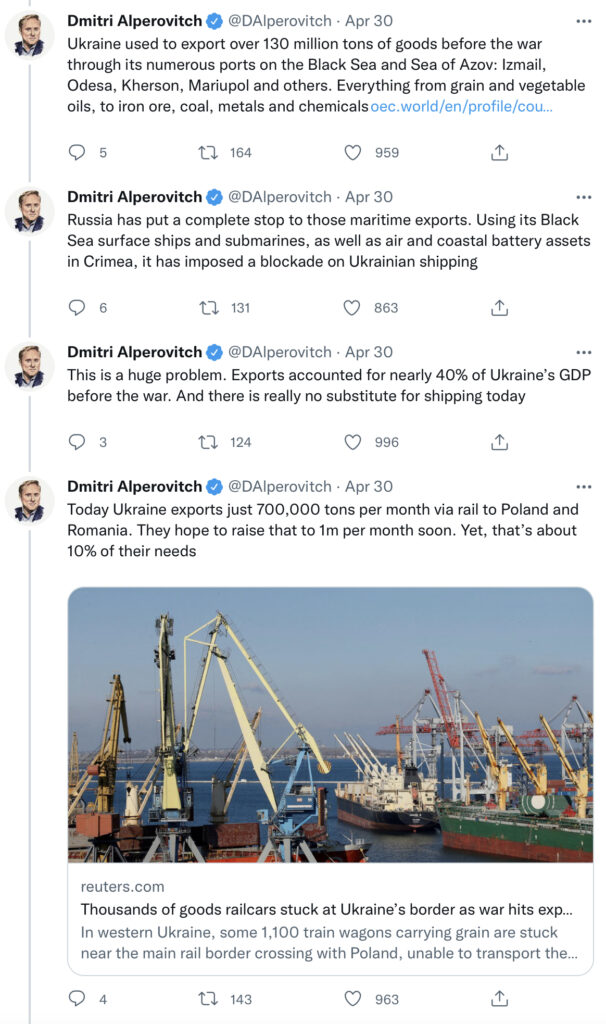 Last week I pointed to Yuriy Gorodnichenko‘s estimate that Ukraine needed about 40-50% of monthly pre-war national income to wage the war, and his skepticism that Western assistance could fill the gap. So how Ukrainians can produce and export goods is a big question for those  of us who would like to see them stay strong against the invasion.

This is a risky and expensive war for Russia too, which makes me hopeful (though hardly confident) that this could settle down to low-scale hostilities and stalemate in the next few months. On that, and whether the war escalates, here is another piece I enjoyed:

It may be that this battle will end in stalemate, so leading to a quagmire. Certainly the two sides will be unable to sustain a war of this intensity for much longer, so there could be some temporary truce or simply mutual exhaustion resulting in the fighting subsiding, continuing at a lower level for some time, before the pace picks up again. Arguably this is what has been going on since March 2014 when Russia seized Crimea.

That from a long post from Lawrence Freedman, an Emeritus Professor of War Studies at King’s College London.

Here he is on nuclear prospects:

The nuclear threat is being reserved for the most serious form of external intervention  – direct engagement in combat by one or more NATO countries. This has been the priority for deterrence since the start of the conflict. On Wednesday Putin threatened ‘lightning-fast’ retaliation against any Western countries that intervene on Ukraine’s behalf. This is the red line recognized and respected thus far by NATO countries. His point was underlined by the successful testing of the Sarmat intercontinental ballistic missile (ICBM) on 20 April, duly characterized by Putin as providing ‘food for thought’ to potential adversaries. For his part president Biden has played down the threat, urging Russia on Thursday not to make ‘idle comments about use of nuclear weapons.’

These nuclear warnings all depend on strategic systems and not so-called battlefield nuclear weapons. There are no signs that Russia is preparing to use these or, for that matter, chemical weapons in the fight. In neither case would it help that much to gain a military advantage. A battlefield nuclear explosion would make a difference if there was a large and conspicuous concentration of Ukrainian forces preparing for an offensive, but even if there was, Russia is not short of weapons that can cause massive blasts. Unless there was a military advantage to be gained, the only reason to use a nuclear weapon would be to signal that an escalatory process was beginning, thus passing a vital threshold without any material strategic gain and with uncertain consequences, including potentially prompting the full-scale war with NATO Russia seeks to avoid.

The necessary condition for a negotiated settlement remains as has always been the case: for Moscow to recognise that this war is going badly and that its short-term military prospects are poor. Because of his past bombast it is hard to imagine a humbled Putin admitting meekly to a monumental failure. But if the alternatives are a quagmire that prolongs the misery or an escalation that yields no strategic benefit then perhaps within Russia’s elite, including the senior ranks of the military, there will be more stirrings against the continuation of this futile war. They might consider the implications of a complete battlefield failure in the Dombas and the potential value of an agreed, orderly withdrawal.

There is a lot of fighting to be done before we reach this stage, and it may never be reached, especially if Russian forces prove to be more successful in defence than in attack. But it is important that would-be mediators adjust their proposals to take account of the surprising and devastating course the war has taken. When it began advocates of an active peace diplomacy were wondering what sort of partition of his country Zelensky could be persuaded to accept. Now they need to consider the practicalities of getting Russian troops out of the country. They should banish the notion that despite having set in motion this calamitous war Putin must be given some reward to bring it to a conclusion so that his ‘face’ can be saved and even greater calamities prevented. Zelensky’s face is as important as Putin’s, and he would lose his if – after all the sacrifices of his people – he was asked to find concessions to help render Putin’s defeat more palatable.

The problem from the start has not been Putin’s face but his mind. The track record of those attempting to anticipate his choices has been poor, and constant speculation about how he might lash out as he approaches his personal Götterdämmerung tends to make us more anxious than wise. There are all sorts of things that Putin might do to express his anger and frustration but none will gain him any lasting strategic advantage. The best course is for Ukraine to stick to its reasonable objective of expelling Russian troops from its soil and NATO to support them in that endeavour.