The German romance with Russia was wider than Gerhard Schröder 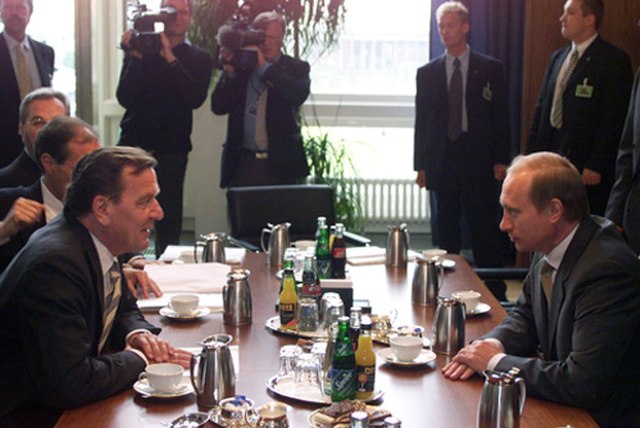 This New York Times article on Gerhard Schröder’s entanglements with Russia and Putin is justifiably gaining attention. It’s a good piece. I still remember Tyler Cowen’s post on this from 5 years ago, which shocked me as something deeply important in foreign affairs of which (to that point) I was wholly unaware.

Here is Tyler’s original post in full, titled A bit of context on Trump, NATO, and Germany:

I strongly favor NATO and I don’t think you can trust the Russians with just about anything, or for that matter make much of a deal with them.  I’m with Mitt Romney on all of this, as I’ve been saying for years.

That said, I feel some of the recent discussions on Trump’s pronouncements have been a bit kontextlos.  I would suggest this wee bit of background history:

1. Not too long ago, Germany did have a national leader, Gerhard Schröder, who in essence ended up as a paid agent of Vladimir Putin.  After leaving office, he has spent much of the rest of his career working for Gazprom.  Try on this bit for size:

Mr Schroeder was Germany’s Social Democrat leader from 1998 until 2005. He is a personal friend of Vladimir Putin and once described the Russian President as a “flawless democrat”. He joined the board of the Russian energy giant Gazprom after losing Germany’s 2005 election and has defended Russia’s response to the crisis in Ukraine on several occasions.

In other words, Germany had its own Trump long before the United States did.  You could call Schröder the Ur-Trump, albeit with a different socioeconomic pose.

2. It was Schröder who made the decision to take Germany off nuclear power and also to make the country energy-dependent on Russia:

As Chancellor, Gerhard Schröder was a strong advocate of the Nord Stream pipeline project, which aims to supply Russian gas directly to Germany, thereby bypassing transit countries. The agreement to build the pipeline was signed two weeks before the German parliamentary election. On 24 October 2005, just a few weeks before Schröder stepped down as Chancellor, the German government guaranteed to cover 1 billion euros of the Nord Stream project cost, should Gazprom default on a loan…Soon after stepping down as chancellor, Schröder accepted Gazprom’s nomination for the post of the head of the shareholders’ committee of Nord Stream AG, raising questions about a potential conflict of interest.

Russia now provides 35% of Germany’s oil imports and 39% of the natural gas imports.

I say NATO as an instrument for opposing Russia (not its only purpose, however) mostly ended with the Russian gas deal, because Putin can turn off the spigot any time he wants.  Germany, the major European power, can no longer stand up to Russia in a pinch and it cannot do so because of the corruption of one of its major leaders.  (Merkel I believe would not have done the same, but it is hard for her to undo this unfortunate situation, though I applaud the toughness she has shown, which at times has been considerable.)  Furthermore, earlier U.S. presidents, most of all Bush, didn’t have the stones or the means to do anything about this.

If you’re looking for icing on the cake, try this:

3. Germans today are some of the most anti-American people in Europe, and that doesn’t help the Atlantic alliance either.  It’s not uncommon for German citizens to suggest they don’t see much difference between Putin and the United States (NYT), or even may be pro-Putin, and I mean that pre-Trump.  So when Trump equates Putin and Merkel, German citizens have been equating American presidents with Putin for a good while now.  That’s not an excuse or rationale for Trump’s behavior, but it is worth keeping in mind when thinking about how to reboot the alliance moving forward.

I don’t at all favor what Trump is saying, or how many Republicans don’t seem to be complaining, but NATO has been on the ropes for some time now.  On the Russia issue, Trumpismus is far more advanced in Germany than here in the United States.  The sorry truth is that some of what Trump is saying is true, though his current rhetoric probably will end up making it worse.

The bolding in point 3 is mine, and the links are worth following. From the first link:

Twenty-five years after the end of the Cold War, German society may well be drifting away from the West again. In a poll last month by Infratest/dimap, 49 percent of Germans said they wanted their country to take a middle position between the West and Russia in the Ukraine crisis, and only 45 percent wanted to be firmly in the Western camp.

…To be fair, in a recent poll 60 percent of Germans said that their country should stand with the West in the Ukraine crisis. So Russia’s ongoing aggression is having some effect on public opinion. But that still means that nearly half of all Germans do not feel a deep connection with the West and its values — which is precisely what Mr. Putin wants.

There are not many upsides to Russia’s brutal invasion of Ukraine. A reminder to everyone why we have allies and cooperation might be one of them.