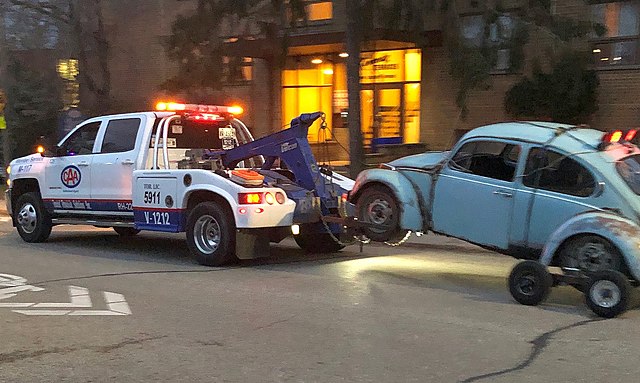 Criminal governance emerges to regulate violence and black market business when the state can or does not. Even in Toronto.

To understand why there’s so much crime in Canada’s towing industry, we have to back up and look at what many local organizations blame as being part of the problem: the way police call tow trucks to the scene of a wreck, and the lack of industry regulation.

When there’s a wreck that requires a vehicle to be towed, the responding police department generally has a policy on how to contact a recovery company to tow the vehicle. Often, this is accomplished using a revolving list of approved companies that the department facilitates. However, not all departments follow this model, as the goal is often to clear an accident as quickly as possible to restore traffic flow. That means some departments—like the Ontario Provincial Police (OPP)—instead rely on the industry’s competitive drivers (called “chasers”) who race to be the first on the scene in order to get the job.

Chasers aren’t new to the towing industry by any means, whether it be Canada or the United States. For many companies, the so-called “first available” model is one of the main ways to do business. Trucks constantly patrol crash hotspots in major cities and wait for the police to request the first available tow truck over their police scanner. Over time, this has escalated into companies and drivers monitoring police scanners and traffic reports for any hint of an accident, and then racing—or “chasing” the crash—to be the first company on the scene to offer services to a motorist with a disabled vehicle. Often, they beat the police to the scene and make off with the vehicle before officers even arrive.

…News reports of recovery agencies battling one another can be found dating back nearly two decades. Towing providers describe the Greater Toronto Area as being “the worst” in all of Canada when it comes to skirmishes between providers. Roadside brawls turned into gunfights and murders. More than 50 cases of arson have been connected to the towing industry, including multiple tow trucks being set ablaze throughout the years. Some towing providers even began intentionally causing accidents on highways and in parking lots to get more jobs and more kickbacks.

Many critics blame the lack of industry regulation, something which only recently came into existence for towing providers, but still doesn’t address what happens after the vehicle is taken off the truck.

…having a financial interest in a repair shop is central to this issue. As police and lawmakers would later find out, this is where some towing companies begin to make significant income thanks to kickbacks from sketchy auto body repair shops. And once at the repair shop, some car owners were even told that they didn’t have a choice where they could have their vehicle repaired, with the shop refusing to release a vehicle without the consumer paying huge storage fees.

Read the full amazing article by Rob Stumpf here. Hat tip to The Browser, one of my favorite newsletters of links.

By the way, criminal governance doesn’t always emerge in the absence of the state. In Medellin, some of my recent work with Ben Lessing, Santiago Tobon and Gustavo Duncan shows that (when it’s in the interests of their drug business) gangs will try to outcompete the state on governance. In Medellin, Colombia, instead of places governed by the state and others by gangs, you have places with lots of both or little of each.

Here’s a piece by Ben on how to think about criminal governance, and its different forms worldwide.

For more excitement, however, here are tow trucks racing to the scene in Toronto:

Here is a brawl:

Here is a firebombing of a rival. Toronto! You have changed so much since my days living there. Maybe we should come run a study there?