The danger of demonization

Some lessons from the last war seem relevant for the current one. What I’ve been reading:

…The Taliban in 2002 were broken. After fleeing Kandahar, Mullah Omar hid out in northern Helmand, Uruzgan, and Zabul. A new direction for the movement had yet to coalesce. Various commanders were preparing to continue the war, a few in al-Qa‘eda and militant camps in Pakistan. Others were resting in Pakistan or attempting to retire to community life inside Afghanistan. A number wanted to cooperate with the new Afghan government.

After the failed negotiation between Taliban leaders and Karzai in December 2001, senior Taliban delegations reached out to Karzai again between 2002 and 2004. [Taliban leader] Mullah Omar may have authorized them or they may have been independent endeavors. One occurred right after the fall of the Taliban. Former Taliban foreign minister Wakil Ahmed Mutawakil went to Kandahar in January 2002 to meet with Americans. He was arrested but then discussed a plan with a CIA official to create a Taliban group allied with Karzai. The idea was briefed in Washington to Vice President Dick Cheney. He immediately shut it down. According to a participant, Cheney’s view was that all Taliban were bad. 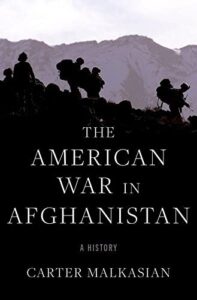 I’ve been engrossed in Carter Malkasian’s book, The American War in Afghanistan: A History. What’s so striking (and depressing) are all the hints and signs of how close the two sides were to a peace agreement. And how intransigence (among other things) stopped that deal. Another example:

…In spring 2002, before the Emergency Loya Jirga, Mullah Omar’s former aide Tayeb Agha sent Karzai a letter. According to certain sources, Mullah Omar himself had dictated it. The letter proposed the Taliban play a role in the formation of the new state. Karzai apparently wanted to pursue the opportunity. Khalilzad and other US officials never discussed inviting the Taliban to the jirga and later claimed ignorance of the letter.

…When Karzai brought up the 2004 Taliban peace feelers, the Bush administration banned negotiations with the top Taliban leaders. The US National Security Council wrote up a “blacklist” of 31 Taliban leaders (according to certain sources it was more than 80). The Afghan government was forbidden from talking with those on the list. Just about anyone who mattered in the Taliban was on it, including Mullah Baradar and Tayeb Agha, two leaders who had been instrumental in the December 2001 talks with Karzai and would play leading roles in future peace efforts.

Earlier in the book, Malkasian gives example after example of the same ideological refusal to deal, and the same outcome, in the run-up to the invasion. The demonization of the Taliban (along other factors) meant that the Bush administration adamantly avoided any compromise with the Taliban.

I can understand that initial intransigence, especially when the Taliban’s distinction from (and frustration with) bin Laden and al-Qa‘eda were not so clear—another fascinating part of this book.

What I find more surprising and tragic is that, even after the successful invasion, there was a deliberate strategy to keep the Taliban out of the political process. To me it ranks as one of the great strategic blunders of the past half century. Malkasian puts it well:

The United States purposefully excluded the Taliban from the political process from Bonn onward. In fairness, the Taliban hardly helped themselves. They did not renounce hosting groups that planned to attack the West. Nevertheless, Bush and his team could have done more. After October 2001, there are no known US attempts to talk with Taliban leaders until the Obama administration.

The Taliban were a major party to the civil war. Excluding them almost ensured substantial numbers of Afghans would dislike the new state. What is truly damning is that there was no real obstacle to trying to talk to the Taliban. Few other policies for Afghanistan would be so low-cost.

To me it’s even simpler than that: if you do not offer a political process to an influential foe, you leave them with violence only. War is politics by other means.

There’s a parallel to this famous advice from Sun Tzu in The Art of War:

Build your opponent a golden bridge to retreat.

This is relevant today. Twitter, the press, and political speeches are demonizing Putin. He is evil. To be stopped at all costs. I many ways I agree.

At the same time, in all likelihood he will remain powerful. Certainly Russia will.

This means walking a difficult line between condemning evil, self-serving acts, but not working ourselves into a lather, to the point where we punish diplomats and presidents who find a way to settle with terrible, powerful people. It’s an unpleasant thought, but it’s better than all the alternatives.