A coherent and (mostly) strategic explanation for war in Eastern Europe emerges? 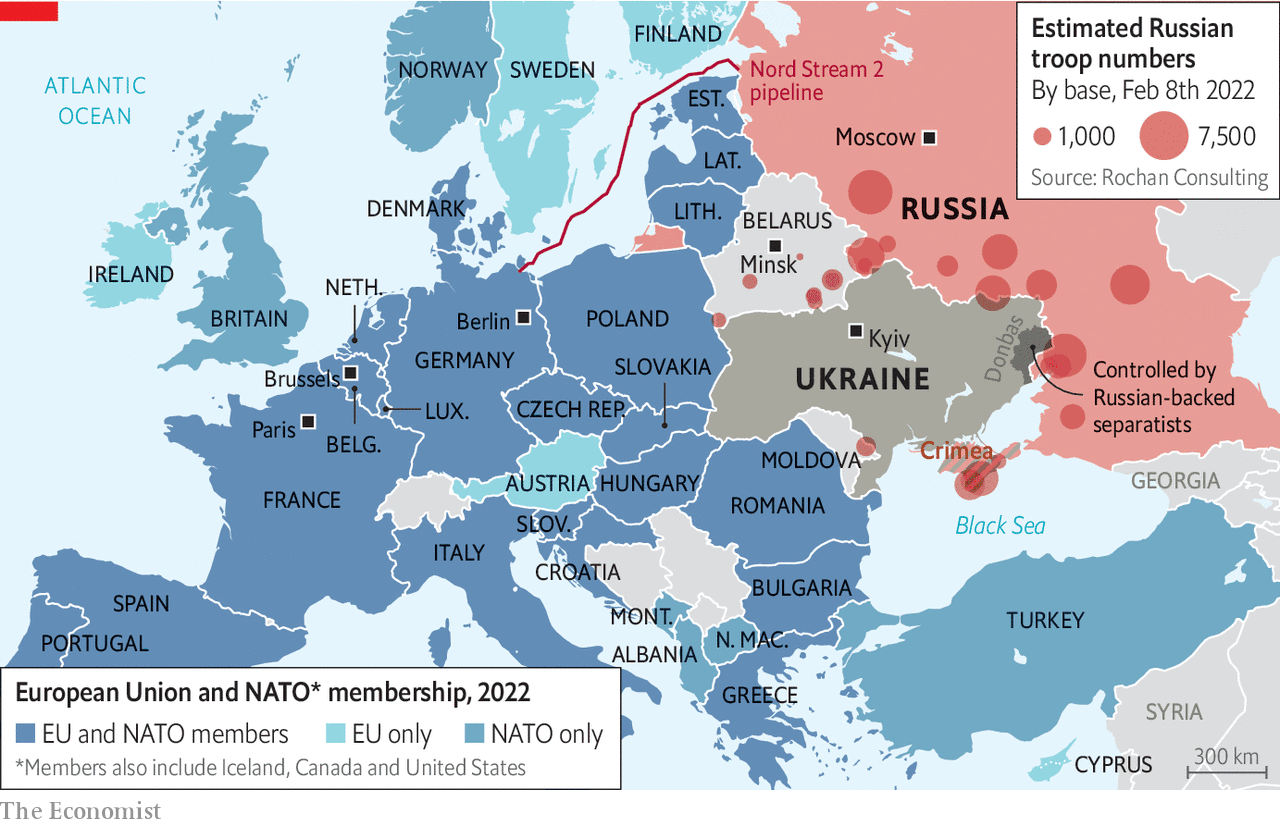 Yesterday Russia moved to consolidate its control over eastern separatist regions of Ukraine. People bickered over whether this constituted an invasion, at which point Noah Smith won Twitter for the day:

If it’s not from the Invasion region of southern France, then it’s not an invasion, it’s just a sparkling annexation

I’m only medium-good at tweets, and I don’t have much experience at all with Russia or Ukraine. But what I can do is parse the different arguments for what’s going on into their strategic and nonstrategic logics.

What do I mean by nonstrategic logics? I mean ones that rely almost solely on the preferences or perceptions of one side, and not on the complex benefit calculus and interactions between each side.

For example, some say Putin is deluded or misinformed about his chances of victory (a case of misperceptions). Others believe he has a burning desire to be the next Catherine the Great, restoring Russia’s position as a Great Power. Both are completely plausible. But the argument typically stops there.

Yet not only is invading going to be tremendously expensive for Putin, and not only will the sanctions bite, but it could threaten everything he’s built at home. My colleagues Scott Gehlbach and Zhaotian Luo have a nice piece on how an invasion is likely to be unpopular with Russians. That could force Putin to make Russia a more totalitarian and repressive autocracy, a considerable risk to his regime.

That means that, if you want to believe that invasion is driven by Putin’s desires or errors, you have to think they are so deep and firmly entrenched that they overwhelm the other side of the cost-benefit calculus. That’s completely plausible. I believe in non-strategic causes of war. But you have to admit it’s a harder case to make once you consider the other side of the ledger.

Then there are the more strategic arguments. Some say there are “audience costs”. Putin can’t back down now, or he’ll lose face and support at home. I’m not sure I buy these arguments, especially if Gehlbach and Luo are correct that the invasion is unpopular. But maybe it’s true. (And, if so, perhaps that means he could declare victory with yesterday’s consolidation of control, and negotiate the rest of the way.) But even if correct, this story doesn’t tell us why Russia started this brouhaha in the first place.

Another strategic story involves uncertainty. I explained the logic last week. The basic idea is that Putin needed to bring the region to the brink of war to determine just how resolved NATO and Ukrainians could be.

Another story comes from from Rob Lee. I read it a couple of weeks ago, and still find it relevant.

When assessing Moscow’s cost-benefit analysis of using force in Ukraine, it is important to consider not just the likely costs of an escalation now, but also the costs of not taking action. There is no evidence a NATO member has considered providing long-range missiles to Ukraine, but other forms of defense cooperation with Kyiv have steadily intensified. Moscow wants to preempt further arms deliveries before Ukraine receives strategically significant weapons that could change the military balance, unlike Javelin anti-tank guided missiles provided by the United States. While it is much more effective today than in 2014, the Ukrainian military lacks strong long-range fires capabilities, particularly relative to Russia.

Concerning Ukraine, Russia lacks many tools to influence Kyiv other than military force. Thus, Moscow likely believes a significant military escalation now would be less costly today than in the future if Ukraine continues to strengthen its military capabilities. If Ukraine had longer-range missiles, it could threaten Russian cities or military infrastructure, limiting Russia’s ability to use military threats to coerce Kyiv. Notably, the assembly areas where Russian forces have massed their equipment in Yelnya and Pogonovo are beyond the range of Ukraine’s Tochka-U tactical ballistic missiles.

A large-scale invasion is not Russia’s only course of action as part of a compellence campaign. There are multiple tiers of military force that Moscow could employ depending on how ambitious its objectives are. The more ambitious the goal, the more force necessary to change Kyiv’s and NATO’s cost-benefit calculus. If Russia is determined to force constitutional changes in Ukraine or a modified version of the Minsk accords, it is unlikely to achieve this short of a ground invasion or heavy use of fires that could threaten the survival of the Ukrainian state.

Seizing and occupying territory could be a means of raising pressure on Kyiv, but occupying terrain would not be the ultimate objective. If Russia had sought to occupy more territory, the past few weeks of public ultimatums would have been counterproductive, simply giving Ukraine and NATO more time to prepare.

I think that Lee is describing a kind of commitment problem—a classic case of the preventative war. This is the idea that Ukraine will one day soon have long range missiles and other defensive capabilities that make it far harder for Russia to invade. And with reduced threat of invasion, Ukraine will have more bargaining power vis a vis Putin. A window of opportunity is closing.

The only way out is for Ukraine to commit to never develop these capabilities. But that is hard to do. They could acquire them suddenly, or in secret. Or maybe it is political suicide for any government to make such a promise. There’s a commitment problem that prevents peace.

(This is a classic explanation for World War I and the US invasion of Iraq as well—again, two cases where the ineptitude and ideology of leaders gets too much credit for starting a war).

This jives with other accounts I’ve heard from Russia experts: that the current crisis, and the support for separatist movements over the past decade, is fundamentally about Russia trying to influence or control the Ukrainian government without starting a war. That might be because Putin wants to prevent Ukraine from improving its defensive capabilities and bargaining power. In addition, it could be that a successful Ukrainian democracy is also a long run threat. With time, it risks revealing to Russians the limits of their authoritarian system, and that people like them can enjoy freedoms.

This too would present a commitment problem if Ukrainians cannot commit to roll back their democracy, or give Russia more influence or de facto control.

This to me is what is so puzzling about Russia’s move into the eastern part of Ukraine yesterday. It’s unclear how this resolves his desire for de facto control of Ukraine. If anything, it probably makes this harder. Depending on what you think about Putin’s preferences, this either increases or decreases the chances of a full scale invasion of the full country. For example: 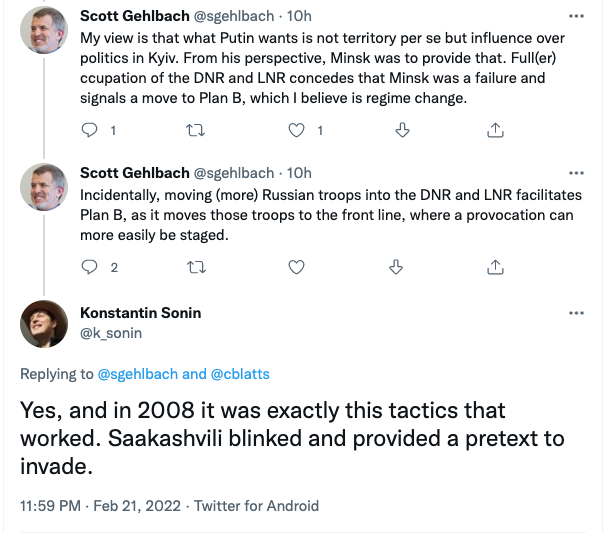 Finally, for all this talk about strategic explanations, a little known point: at root, a lot of commitment problem stories (including this one) are non-strategic at their heart.

The reason is that they rely on a plausible but incompletely-specified “indivisibility”. And usually this is ideological, because the thing in question is actually divisible. People just don’t ant to divide it.

As I said, the commitment problem and risk of war go away if the Ukraine and its allies simply agree not to acquire defensive capabilities or commit to keeping their democracy flawed or captured or semi-authoritarian enough to not become a shining beacon of hope on Russia’s shores.

This might be hard to do. It might be technically difficult to split up and weaken defensive capabilities, let alone design flawed institutions. Institutions are lumpy and beyond such easy control. But to me the more likely friction is that Ukrainians would find the idea revolting. It goes back to something I wrote last week, which is that Ukrainian intransigence—noble and inspiring—might be the most likely reason there is a war. Putin asks for something abhorrent to relinquish—don’t defend yourself, and sacrifice the freedom of quality and independence of your society—and so both sides would rather fight it out.

So even our so-called strategic explanation is a little “nonstrategic”.

For me, the answer to what’s happening is still “all of the above” plus “maybe not enough for full war”. The uncertainty is undoubtedly there. And the commitment problems sound plausible. But, like most times in history, there is a way out.

Still, the two problems narrow the path to peaceful resolution to something treacherously thin. That’s precisely why one side’s strategic errors, or the idiosyncratic tastes of an autocrat, can tip the situation for war. (That’s arguably what happened in World War I and the US invasion of Iraq.) It’s why several colleagues have convinced me that the risks of an invasion are higher than I initially believed. I’m still stubbornly more optimistic than most. But I agree we are finally beginning to see a coherent explanation for war in eastern Europe. And it’s not 100% strategic.