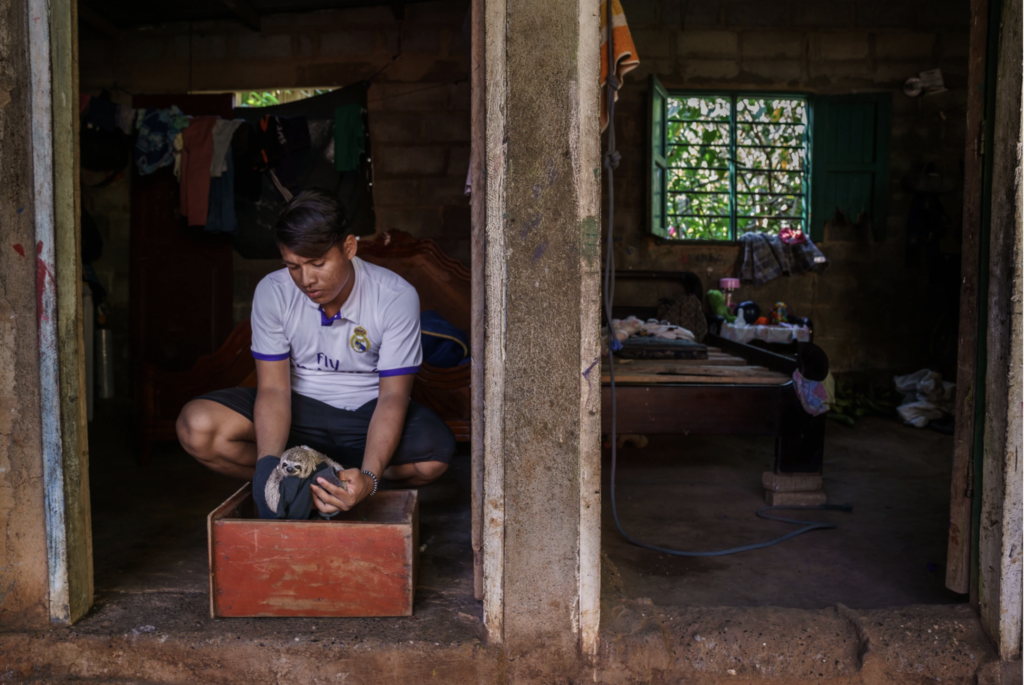 I’d come to Colombia to find a man named Isaac Bedoya, described by the Colombian media as Latin America’s most notorious sloth trader. The country’s wildlife authorities estimate that he and his accomplices captured and sold as many as 10,000 sloths into the pet trade during the three decades before his conviction in 2015.

That is Natasha Daly writing in National Geographic on the sloth cartel, with photos by Juan Arredondo. But (as is so often true in so-called organized crime, but seldom reported) instead of a kingpin and a nefarious and sophisticated network, the reality was more slipshod, amateurish, and sad. She found people like Yilber Benites.

The last time I saw Benites, we were in a mall food court in Montería, an hour-long bus ride from his home. He’d said he wanted to talk more, so he made a detour on his way to Medellín, where he was heading to sell a poached owl. A middleman there had a client who wanted the bird as a pet.

He stashed the owl somewhere before sitting down to talk. After graduating from high school, Benites said, he went to a local technical institute to train to be a medical technician. It’s a steady job with a decent salary. But school cost about $80 a month. “Selling animals is how I paid for it,” he said.

Money had been particularly tight ever since Benites was 10. That’s when his dad, who drove a taxi and also sold animals, went to work one day and never came home. His body wasn’t found, and Benites believes an armed group killed him. “They were disappearing a lot of people at that time,” he said. Increasingly, it fell on Benites to take care of his mother, six brothers, and three sisters.

He tried to stay in school. But he couldn’t keep up with the fees and dropped out. That’s when he turned to poaching full-time.

It made me recall something Mendoza, the environmental police officer, had said: Many people in rural Córdoba are poor, but they don’t all traffic wildlife. Benites’ livelihood was a product of desperation compounded by personal tragedy—and his own choices.

I wanted Benites to understand that publication of this story could put him at risk. He said he knew that and started to cry. I did too. “I really want to stop,” he said through tears, “but I don’t have another option. I hope to God things will get better.”

I got in my taxi, and Benites went off to collect his owl and take the bus to Medellín.

This, as it turns out, is the sloth “cartel.” Not a sophisticated, interconnected criminal enterprise but supply and demand at its most elemental: tourists wanting baby sloths, and desperate young men hunting them down to sell for a living.

Individual roadside interactions add up to a market. The elusive Isaac Bedoya is believed to have trafficked 10,000 sloths over 30 years—some 28 a month. That’s about the same monthly number that Benites and Morales, who represent a new generation of strivers, said they sell during the peak season. It’s barely enough to survive, Benites said. “If I continue like this selling animals, I won’t make it. The money we make, it’s just enough to eat.”

When I asked Benites and his friends in Altos de Polonia if they knew where I could find Bedoya, they responded with blank smiles. Then they admitted they didn’t really know who he was.