I have just finished The Imperfectionists 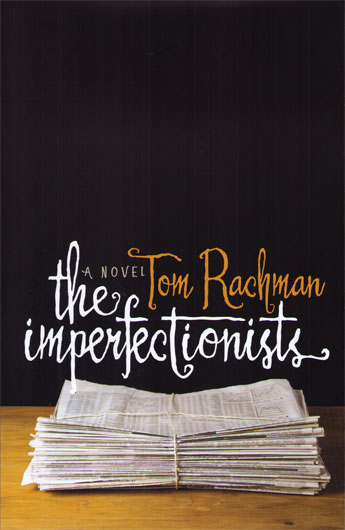 , a novel by Tom Rachman’s that follows a bunch of mostly inept and self-loathing journalists through the life and death of an international newspaper not unlike the Herald Tribune (except this one is never bought by the Times).

The book more or less exults in its characters’ mediocrity, which is not as unappealing as it sounds (but it is kind of unappealing).

The book reaches its lowest point in an attempt to make farce of the foreign correspondent/adrenaline jockey/ignoramus. No one can match Evelyn Waugh’s Scoop, but it would be nice if Rachman came close. It’s probably the only clumsy chapter, though, and safely skipped.

So far I make this book sound rather bad. Actually I quite enjoyed it, and suspect the journalists out there will like it even more.

But the book is mainly worth reading for Chapter 2, in which an aged and bitter intellectual lectures her obituarer. (Is that even a word?)

The chapter is actually more of a soliloquy on death and ambition than fiction. Maybe the author’s outlet for philosophical musings. There are several excellent bits.

“Who reads my books anymore? Who has heard of me at this stage?”

“Oh dear-listen to me,” she goes on. “I say that ambition is absurd, and yet I remain in its thrall. It’s like being a slave all your life, then learning one day that you never had a master, and returning to work all the same. Can you imagine a force in the universe greater than this? Not in my universe.

You know, even from earliest childhood it dominated me. I longed for achievements, to be influential-that, in particular. To sway people. This has been my religion: the belief that I deserve attention, that they are wrong not to listen, that those who dispute me are fools. Yet, no matter what I achieve, the world lives on, impertinent, indifferent-I know all this, but I can’t get it through my head. It is why, I suppose, I agreed to talk to you. To this day, I’ll pursue any folly to make the rest of you shut up and listen to me, as you should have from the start!”

She coughs and reaches for a fresh cigarette. “Here is a fact: nothing in all civilization has been as productive as ludicrous ambition. Whatever its ills, nothing has created more. Cathedrals, sonatas, encyclopedias: love of God was not behind them, nor love of life. But the love of man to be worshipped by man.”

In any case, I’m not afraid of it. Not in the least. You can’t dread what you can’t experience. The only death we experience is that of other people.

…my point, you see, is that death is misunderstood. The loss of one’s life is not the greatest loss. It is no loss at all. To others, perhaps, but not to oneself. From one’s own perspective, experience simply halts. From one’s own perspective, there is no loss. You see? Yet maybe this is a game of words, too, because it doesn’t make it any less frightening, does it.”

She sips her tea. “What I really fear is time. That’s the devil: whipping us on when we’d rather loll, so the present sprints by, impossible to grasp, and all is suddenly past, a past that won’t hold still, that slides into these inauthentic tales. My past-it doesn’t feel real in the slightest. The person who inhabited it is not me. It’s as if the present me is constantly dissolving.

For reasons I don’t understand, the entire book seems to be online here.