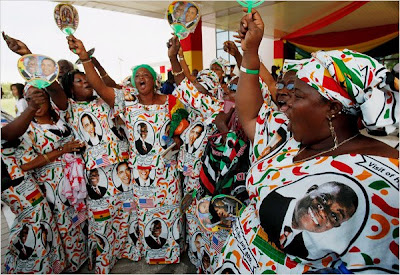 Obama spoke to Africa Saturday. Text here. Commentary galore. Bill Easterly grades the speech. I quite like that idea. So here are my thoughts.

“We must start from the simple premise that Africa’s future is up to Africans.”

A+. This is the perfect theme. Now, my first reaction was actually, “No duh.” Can you imagine a foreign leader visiting the UK and saying “Britain’s future is up to Britons”? No way. But I suspect Africans were the message’s secondary target. The first target: us. Africa ain’t ours to save.

“But the West is not responsible for the destruction of the Zimbabwean economy over the last decade, or wars in which children are enlisted as combatants.”

B-. Charles Taylor and Robert Mugabe may have written the script, but we set the stage. We put in power the thugs they overthrew. We bought their conflict timber and diamonds. We stood in the way of political reforms that could lessen the risk conflict. Meddling, especially by France, lasted long after native flags replaced the Union Jack and Tricolore. It continues today. Let’s not forget this inconvenient truth.

“The people of Ghana have worked hard to put democracy on a firmer footing, with repeated peaceful transfers of power even in the wake of closely contested elections. And by the way, can I say that for that the minority deserves as much credit as the majority.”

A-. Ghana’s 2008 election gives me the warm fuzzies. Opposition leader Atta-Mills beat the ruling party candidate, Akufo-Addo, by a margin under one percent, with irregularities. Things got steamy, and I worried we’d repeat the Kenya election violence we’d seen a year before. That’s when Akufo’s party elders, notably outgoing President Kufuor, appealed to Akufo to concede. Akufo pulled an Al Gore: putting the country’s institutions ahead of his own ideas and ambitions. Like I said: warm fuzzies.

The trouble is, it didn’t have to play out that way. Stability trumped violence because of the integrity of a few men. Of course the institutions and society’s norms drive these men and the decisions they make. But had a different butterfly flapped its wings I wonder if Kenya could have gone the stable way, and Ghana the violent path. So let’s not read too much into a single election.

“But what America will do is increase assistance for responsible individuals and responsible institutions, with a focus on supporting good governance — on parliaments, which check abuses of power and ensure that opposition voices are heard … on the rule of law, which ensures the equal administration of justice; on civic participation, so that young people get involved; and on concrete solutions to corruption like forensic accounting and automating services … strengthening hot lines, protecting whistle-blowers to advance transparency and accountability.

And we provide this support. I have directed my administration to give greater attention to corruption in our human rights reports. People everywhere should have the right to start a business or get an education without paying a bribe.”

D. My first reaction was “Yes! Balance of power!” My second reaction was: “Human rights reports? Are you kidding me?”

America’s framers of the Constitution did not write in an anti-corruption commission. They thought about power and just how bad things get when it’s captured. They thought big: legislators need to watch the President; judges watch the legislators; the press watch all; and to be extra sure, everybody else is standing by with a gun.

At African Independence, nearly every nation’s system was parliamentary. Within a few years, all but four had concentrated tyrannical power in a President. Corruption is a symptom of a that disease. The cure: balance that power. Anything less will fail.

The puritanical quest to fight corruption is not a terrible one. It is merely insufficient. I hate corruption. It makes my blood boil. I want to punch someone if the nose if they ask me for a bribe. And that is why we should mistrust our instincts to make corruption the #1 fight; it is an emotional crusade, not a rational policy.

And anyone who thinks corruption blocks development should study their 19th century US history. Politics in New York, Washington, and Chicago make the Nigerians look like June Cleaver.

“From South Korea to Singapore, history shows that countries thrive when they invest in their people and in their infrastructure … when they promote multiple export industries, develop a skilled work force and create space for small and medium-sized businesses that create jobs.

As Africans reach for this promise, America will be more responsible in extending our hand. By cutting costs that go to Western consultants and administration, we want to put more resources in the hands of those who need it, while training people to do more for themselves.”

A-. I’m happy. This is a call for an export-oriented industrial policy. I think Dani Rodrik will be pleased.

But I would have liked Obama to be clearer. If “extending a hand” is code for, “giving Africa stable, predictable, and maybe even preferential access to US markets,” then I am ecstatic. Renewing the Africa Growth and Opportunity Act fifteen minutes before it expires (as has been done countless times) is not the answer.

Also, speaking as a Western consultant, I say: “Yes, please put me out of a job.”

“Yet because of incentives — often provided by donor nations — many African doctors and nurses go overseas, or work for programs that focus on a single disease.”

Half an A, half a C. At the end, Obama nails it: the zeal of a few Western donors has led to hyper-spending on a single scourge (HIV/AIDS) to the exclusion of 4,000 other diseases.

And then he pulled the doctors and nurses stunt.

I would like better health systems in Africa. But as Kenya’s Wycliffe Muga recently pointed out: a third of nurses in Kenya are unemployed; there’s just one Kenyan nurse living abroad for every two unemployed ones at home; and the last time Kenya’s nurses asked for a raise the government sacked and replaced all of them. The West’s ‘incentives’ are not necessarily the problem.

In fact, Western incentives to recruit health workers might actually be increasing the number of smart Africans who enter med school. Most won’t get a visa, and will (in many cases) practice medicine at home. See Michael Clemens for more on this.

“Let me be clear: Africa is not the crude caricature of a continent at perpetual war. But if we are honest, for far too many Africans, conflict is a part of life, as constant as the sun.

…And that’s why we stand ready to partner through diplomacy and technical assistance and logistical support, and we will stand behind efforts to hold war criminals accountable. And let me be clear: Our Africa Command is focused not on establishing a foothold in the continent, but on confronting these common challenges to advance the security of America, Africa and the world.”

B+. I may be biased by my choice of research, but I think conflict is easily the biggest barrier to development in Africa. So kudos to Obama for making war and violence his fourth and final theme.

Also, though I share some of Easterly’s fears on foreign aid gone military, I generally feel like peacekeeping does more good than harm. I’ve just come back from Liberia, and a well-financed, well-timed UN mission is a thing of wonder.

But not all conflict is ended at the barrel of a gun. Where Bush was supremely successful was pushing African leaders to end war. In Liberia, South Sudan, Uganda, Cote d’Ivoire, Sierra Leone (the list goes on) leaders got a simple message: stop the fighting, now. Most often, the threat wasn’t one of force, it was an economic and diplomatic one. I would like to think Obama will keep this up, but he didn’t say so in his speech. Rather, he pointed to the barrels of America’s guns.

Overall grade: A-. I liked the speech a lot (it’s just easier to blog the parts where I disagree).

Obama’s term can be a bright one for Africa. His roots and position give him moral authority approaching that of Neson Mandela and Kofi Annan, both of whom have steered African leaders to humane and sensible policies.

But Obama can do one thing these elder statesmen cannot: open our markets. That statement was conspicuously absent from the speech. I hope it won’t be absent from his term.