Sawyer weaves together the history of Sierra Leone, Liberia, and Guinea–together the Mano River Basin–and their two shared decades of despotism and bloody conflict. He does several things most do not: he recognizes the regional, geopolitical nature of so-called “internal wars”; he describes intimately the institutional structures that led to breakdown; and he provides a convincing direction for change.

Sawyer, a political scientist at Indiana U-Bloomington, has a slight edge over his academic peers: he was head of state in Liberia for four years. A Liberian activist for decades, he was nominated Interim President in a period that warlord Charles Taylor controlled the hinterland.

Sawyer’s work also has a little more impact than the average scholar’s; today he leads the nation’s Governance Commission, lobbying to rewrite the Constitution to decentralize power and neutralize opportunities for future warlords.

This is a painting in Liberia’s national gallery (courtesy of Scarlett Lion): 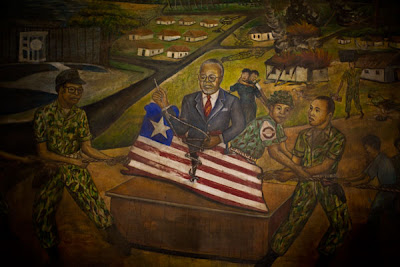 Amos is front and center, stitching together the flag torn asunder by (correct me if I’m wrong) Samuel Doe and Charles Taylor.

The book version, if you’re keen, is here.