The Global Fund, PEPFAR, and the Gates Foundation are just three examples of big organizations throwing big money into the global fight against AIDS. Have they gone too far too fast?

Hendrik van Dalen and Mieke Reuser, both of the Netherlands Interdisciplinary Demographic Institute, give us this graph showing the evolution of health and population aid spending: 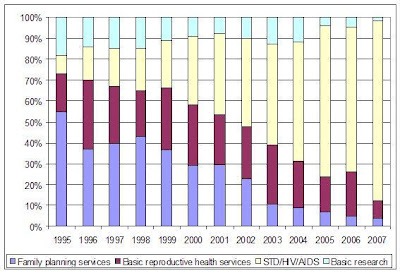 From 30 percent to nearly 90 percent in less than a decade.

I suspect this is largely due to the increase in AIDS funding, not the displacement of other funding, but it nevertheless points to a gross distortion of health priorities.

Mead Over at CGD has been raising this alrm for some time as well. From a recent blog post:

An interview I had last November with the nurse who was responsible for managing a health center in Western Kenya is perhaps revealing. His district health center had tripled in size due to the addition of a clinic, lab, waiting and storage space for treating AIDS patients and for warehousing the fresh produce, cooking oil, flour and other groceries given to supplement the diets of many AIDS patients. The staff nominally reporting to him had increased by several young physicians, who had received special training in AIDS case management.

I asked this gentleman if he could compare the treatment his patients received in the two parts of his clinic. He said, “The patients who receive AIDS treatment leave with a smile. Those here for other problems do not. As I’ve told my ministry, we now have two systems of health care in Kenya.”

Jeannie and I had much the same impression in Liberia, where the infection rate is just 2%. Nevertheless, AIDS dominates international health budgets, largely because of the fire hose of cash coming in (or so it seems). Worse, most of that money appears to be tied to treatment rather than prevention. Can this be right?

P.S. Mead has an excellent paper where he talks about the long term implication of providing AIDS treatment. The central point: once you start, you can’t stop–morally and epidemiologically. But this growing entitlement burden receives too little attention, and may be the source of a future crisis.

One thought on “Are we spending too much money on AIDS?”