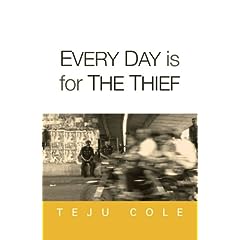 Teju Cole returns to his native Nigeria after fifteen years in New York, and recounts his return in a new book, Every Day is for the Thief. This is a marvelous memoir. After a decade and half away, Cole cannot help but see his home through both Nigerian and Western eyes. The device helps build a bridge between the foreign reader and the life of Lagos without the oversimplification and condescension of so much travel journalism in Africa.

In an early passage, fresh off his flight from New York, and drenched in requests for bribes and “little somethings”, Cole recognizes his own foreignness and struggles to reorient his moral compass.

Night descends with no warning. I am breathing the air of the city for the first time in a decade and half: white smoke, ochre dust, familiar as my own breath. But other things, less visible, have changed. I have taken into myself some of the assumptions of life in a Western democracy–certain ideas about legality, for instance, certain expectations about due process–and in that sense I have returned a stranger. What the trip back from the airport makes me think, and what is confirmed over the course of the following days, is the extent to which Lagos has become a patronage society.

Money, dished out in quantities fitting the context, is a social lubricant here. It eases passage even as it maintains hierarchies. Fifty naira for the man who helps you back out from a parking spot, two hundred naira for the police officer who stops you for no good reason in the dead of night, ten thousand for the clearing agent who helps bring your imported crate through customs.

For many Nigerians, the giving and receiving of bribes, tips, extortion money or alms–the categories are fluid–is not thought of in moral terms. It is seen either as a mild irritant or as an opportunity. It is a way of getting things done, neither more nor less than what money is there for.

Every page of the book contains something poignant and thoughtful. His prose is crisp and elegant. I can’t recommend the book highly enough.

But now, lest readers who have not yet reached Africa think that all the continent is awash in bribes, let me stress that in my six years working there I have not been asked nor have I needed to give a bribe.

Well, almost never. At least not after the first fifteen minutes.

Fresh off the plane for my first stretch of Kenyan field work, I might have left my passport sitting on the airport forex desk, and a soldier might have picked it up, tracked me down, and then asked for a little something in return for the favor. I had three dollars in my pocket. Short story: best money I have ever spent. And he deserved it.

In my books, paying for my own stupidity (or, now that I have a PhD, my absent-mindedness) does not count as a bribe. Or so I say to myself.

3 thoughts on “Every day is for the thief”