The Great Indian Mutiny reports that Fifth Pillar India, an NGO set up to fight corruption, has printed over 200,000 zero-denomination notes that resemble Indian currency and has begun distributing them around the country. It is asking people to give the notes to anyone demanding a bribe. (HT: Ethan Zuckerman)

Meanwhile, the BBC notes that the Zimbabwean central bank is introducing 10 million dollar banknotes in order to ease the critical shortage of cash in the country. 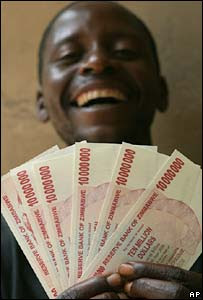 Inflation in Zimbabwe is thought to have reached 50 000 percent per annum. That means that an item that costs one penny in January will go for 500 dollars by Christmas.

Why introduce a 10 million dollar note? Michael Clemens illustrated what it took to buy a beer in Zimbabwe a month ago: 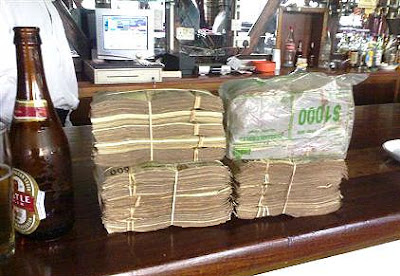 I remember being an Economic History teaching assistant to Ian McLean at Berkeley. He passed around notes printed during the post-WWI German hyperinflation. They needed to print the notes so fast that they decided to print on only one side of the note paper.

Prices in Germany rose 32,500,000 percent per month (where prices double every 49 hours). There is a (possibly apocryphal) story of a man bringing a wheelbarrow of notes to buy a loaf of bread. When he emerged from the store, someone had dumped the notes on the ground, and stolen the only thing of value: the wheelbarrow.

No government has survived such inflation, and Zimbabwe’s surely won’t if they do not get the economy under control. Is the international community (the UN, the AU, the World Bank, the IMF) ready for economic and political meltdown? I haven’t noticed any preparations.

I’m willing to bet the South African military has a game plan, though.

6 thoughts on “From zero rupees to 10 million Zimbabwean dollars”