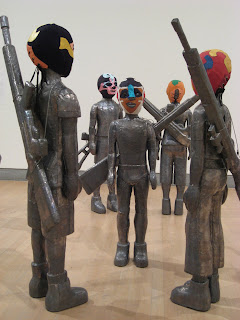 Motion pictures, novels, memoirs, and now… modern art. A new exhibit at the Brooklyn Museum features a sculpture that [from the little label beside the exhibit]:

…consists of nine child soldiers holding weapons practically as large as they are. The figures are made of woof covered in lead, suggesting the children’s hardened psyches and lost innocence as they are forced to participate in an adult world.

I’m not sure how I feel about this. If you’ve been following this blog, you know that my co-researcherand I have been trying to bust some of the myths surrounding the nature and consequences of child soldiering.

This particular exhibit just seems too cartoonish. The artist (Jorge Pineda) even gave them what appear to be Mexican wrestling masks. What that is about? Are these child Mexican wrestlers?

If I can allowed to be especially fastidious, the idea that eight year olds (that is what they look like) could handle the recoil of a gun that size is also ridiculous.

One thought on “Child soldiers, now at the Brooklyn Museum”