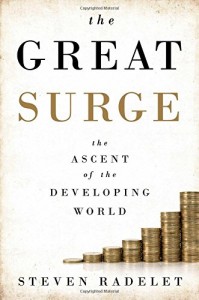 Steve Radelet has a new book, The Great Surge, about why so many countries have risen out of poverty in the past half century. There are many good things about it, but most of all, it’s the best introduction to development I’ve seen for a lay audience, including students. (And for the development experts, it’s a great Christmas present for parents who, after all these years, still don’t understand what you do.)

About eight years ago I started teaching an introductory class on development. I wanted to give undergraduates a sense of why, after so many years of trouble, so many developing countries were growing richer and more democratic, and why others were not. I also wanted them to think critically about the ways in which the West affects the developing world, from trade to aid to statecraft to military invasions. Very quickly the class veered in an unexpected direction: history.

Today, the average undergraduate that walks into my class was minus six when the Cold War ended. This might be obvious if you’re 20 years old. But whenever I point it out to my 40- and 50-year old colleagues, it stops them in their tracks. Maybe they’re just feeling extra old in that moment, but maybe it’s dawning on them how hard it is to talk about where countries are today without a sense of recent history.

Of course I didn’t know half that history myself, and over several years of teaching the class I read more and more, until one day I was no longer just making it up at the front of the class. (Well, I still fake it a little bit.)

You see, an economics education does many wonderful things, but it doesn’t give you a sense of history and policy. I had to teach myself two hundred years of politics and events before I got back to familiar areas where respectable economists wrote papers, about the legacies of settler economies and slavery, or the growth of states and markets in Europe.

Filling this gap seems to be Steve’s aim too. He was an official in the US State Department, USAID, the U.S. Treasury, and the Center for Global Development before he settled at Georgetown University a few years ago, and this is a book that draws on his experiences in Washington, Indonesia, and Liberia alongside academic literature. He’s also been a friend and colleague for many years.

This isn’t exactly the book I’d write. I’d want to write one that is a little closer to the social science literature—a little more geared for the intermediate reader than the introductory one. And a little easier to teach from. But then, if I did that, your parents probably would not want to read it.

Recommended, for you or for that parent.