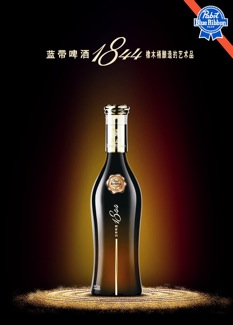 Dave Algoso points us to the most expensive bottle of brew you never imagined:

That reliably blue-collar Milwaukee lager, later adopted by unbearable hipsters on the coasts, has turned up in China. And P.B.R., best known in the U.S. for being the cheapest beer on the grocery-store shelf, has—like so many expatriates before it—taken the move as an opportunity to change its image. For a beer, that appears to involve an elegant glass bottle and a fantastically ridiculous price tag. One bottle: forty-four dollars.

Who would have thought the hipster’s beloved PBR is being advertised in Chinese magazines as a “world famous spirit” to be savored from a champagne flute?

I can just imagine Chinese twentysomethings wearing skinny jeans and a stupid little fedora, sipping their $44 brew from a wine glass.

Full story in the New Yorker.