What happens to your discarded water bottles in Ethiopia? Crunched up into shards, as it turns out, and shipped to China to be melted into common plastics.

This is a photo from a water bottling plant: 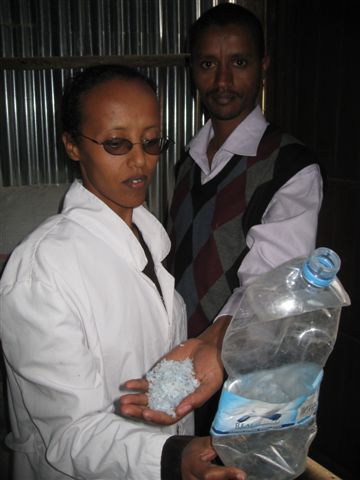 I suddenly feel a shred better about my trail of discarded bottles.

Here is a photo of the factory production line: 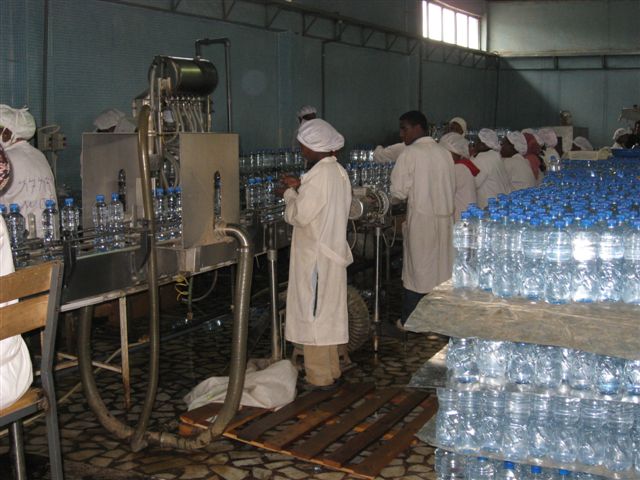 This is not a picture of Africa we usually see. Sad-eyed children are more likely to adorn development strategy reports than productive workers.

Frankly, I’m conflicted. As I walked the factory floor, I couldn’t help but think: what miserable work. Labeling bottles eight hours a day, six days a week. Is this development as freedom? It’s hard to see.

I think back. In high school I spent 18 hours a week slinging chicken for Colonel Sanders. Bryan, our humorless manager, was a cross between Hulk Hogan and Frederick Taylor. Steel-eyed, handlebar mustachioed, and six foot three, Bryan would loom over me with a stopwatch until I could break, wash, dip, bread, rack and deep fry three chickens in two minutes.

He could do it in one and a half.

Was I miserable? Not really. KFC paid fifty cents above minimum wage, and on some level I found the work satisfying. (Plus the burn scars on my arms disappeared after about ten years.) Maybe the difference is I saw it as a short spell (two years, in my case) before taking on a more fulfilling career. And the free health care that comes with being a Canadian.

Clearly, comparing a Canadian suburban restaurant to an Ethiopian factory is absurd on many levels. My point, however, is that drudgery may be deceptive. This will be one of the more interesting things to explore in our RCT of unskilled industrial jobs. (We just have to figure out how to measure it.)

More importantly, the factory line may not be fate. The workers I spoke to had bigger plans, and some seemed headed on that path. Whether this happens is, to me, one of the most important questions in the study.