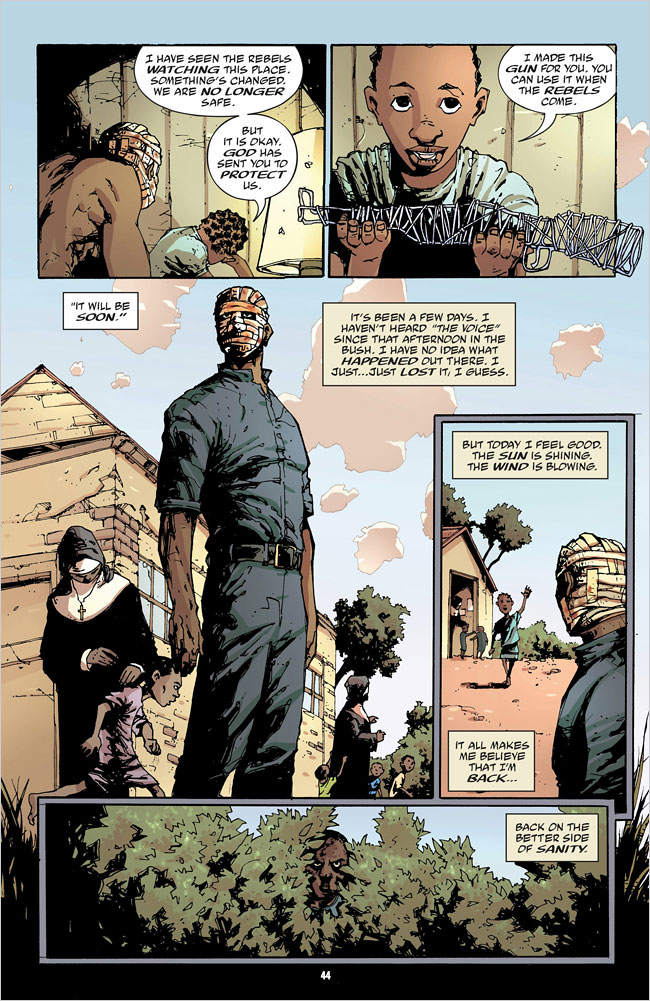 Given my research on child soldiers and the Lord’s Resistance Army in Uganda, a good many readers pointed me to this New York Times article:

Not many monthly comic books come with a glossary, but not many comics are like Unknown Soldier.

…Unknown Soldier, published by Vertigo, an imprint of DC Comics, is about Dr. Lwanga Moses, a Ugandan whose family fled the country for the United States when he was 7. He returns as an adult in 2002 with his wife, Sera, also a physician, hoping to put their medical skills to use in a part of the country that has experienced civil war for 15 years.

Moses is disfigured by the LRA and takes to the bush to wage a one man war against leader Joseph Kony.

My first reaction: This is patently absurd. Northern Uganda can simply not get any more kitsch.

Second reaction: Better not jump to conclusions. To the comic book store.

Tasteful. Thoughtful. Compelling. Gripping. Historically accurate (well, mostly–I mean this is a comic book). Writer Joshua Dysart has done leaps and bounds better then virtually every journalist (and a fair number of researchers) that I know.

Granted, I’ve only read two issues (7 and 8). But I look forward to the release next week of issues 1 to 6 as a graphic novel.

Full disclosure: I am a closet comic book nut, although I haven’t bought one for 22 years. At 13 my Batman/Spiderman/X-men comic book collection was stolen. The insurance company gave me two grand and I gave up comics for good, buying a 286 PC instead–a historical relic that augured my academic and blogging future.