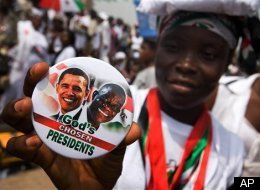 Owen Barder finally talked me down from stage fright into joining a Development Drums podcast. Along with CGD’s Todd Moss, Owen gets my further reactions to Obama’s recent Africa speech and next steps for foreign policy in Africa. (My initial reactions are here.)

As you can see, it’s not exactly a fair fight:

Todd Moss: former Deputy Undersecretary of State of Africa and author of textbook on African development

Me: Writes blog posts about breaking into Land Cruisers with his belly

I do my best under the circumstances.

As if I am not completely intellectually outclassed, other recent DD guests include Alan Beattie and Robert Wade as well as Peter Singer.

You should really be listening to Owen’s regular podcast. You do not need an iPod: you can listen online too.

One thought on “Obama and Africa (the podcast)”