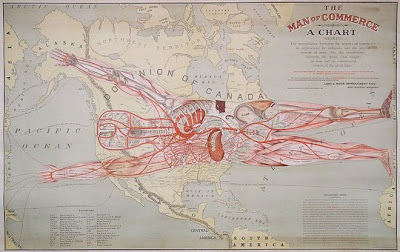 From UWM Libraries (via StrangeMaps):

The American Geographical Society Library has acquired an extremely rare and unusual map, “The Man of Commerce,” published in 1889 in Superior, Wisconsin. The highly detailed 31” x 50” map/chart conflates human anatomy with the American transportation system, in an apparent attempt to promote Superior
as a transportation hub.

Its metaphor makes West Superior “the center of cardiac or heart circulation”; the railways become major arteries; and New York is “the umbilicus through which this man of commerce was developed.”

The explanatory notes conclude: “It is an interesting fact that in no other portion of the known world can any such analogy be found between the natural and artificial channels of commerce and circulatory and digestive apparatus of man.”

The map seems to suggest that Oklahoma and northern Manitoba are the armpits of the continent.

Less believably, the brain appears to be in central Washington, and New Haven CT is… um…

That is just wrong.