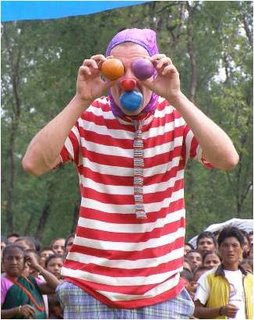 I have received some comments flak for suggesting that clowns ought to have borders.

While I was only half serious, it’s worth pointing out that people who wear masks and perform magic tricks in Africa are not, as a rule, objects of fun and merriment. Traditions vary from place to place, but my sense is that clowns = devilry in more places than not.

But maybe the children are not terrified.

So I’ll try to remain open-minded, even if they probably do spend $10k per clown trip. “That $10k would probably not have been spent on clean water anyways” is not the best thing to recommend an NGO, but perhaps it doesn’t make them the “worst”.

Fortunately for all of us, a new candidate has arisen for worst NGO of all time. I give you WAVES.

The best that can be said: at least they did not call themselves Surfers Sans Frontieres.

P.S. I have another contender, but they are big, and if you didn’t like the clowns comment, you will hate me if I call them out.