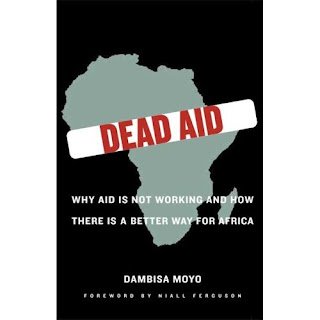 Tukapamoja points me to the complete reviews on (NamibianZambian-born) Dambisa Moyo’s new book, Dead Aid. My impression of the book is a linear combination of three:

In the past, Africans might privately wax cynical about western aid policy, but they were content to leave the public debate to be waged by Irish pop stars, American celebrities and paunchy white men in suits… Moyo belongs to an emerging generation of articulate, self-confident and angry Africans who are now doing just that.

I doubt that many of Africa’s problems can be attributed to aid. It is, in my view, something of a sideshow. Because it lends itself to a simple morality story of guilt and reparation, it receives more attention than is warranted. Paradoxically, despite her radically different argument, Moyo has ended up with the same punchline as the conventional, politically correct diagnosis: Africa’s problems are the consequence of our transgressions.

And perhaps most of all, The Economist:

Dead Aid does not move the debate along much. Yes, she has joined the chorus of disapproval — and that in itself might surprise a few diehards who think that Africans should just be grateful for the aid and shut up. But her arguments are scarcely original and her plodding prose makes her the least stylish of the critics. Moreover, she overstates her case, almost to the point of caricature.