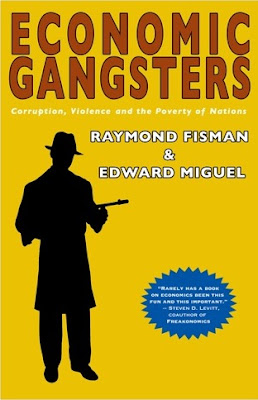 Economists Ray Fisman and Ted Miguel take on global corruption, development and violence in their new book, Economic Gangsters. They offered to be the subjects of this blog’s inaugural book interview.

Some might call your book the Foreign Bureau of Freakonomics. Thoughts?

Ray: We hope, first and foremost, that readers learn something about violence, corruption and global poverty, and what can be done to solve these problems.

Ted: But if readers think Economic Gangsters is an accessible and entertaining take on big economic questions, we’ll obviously be very happy.

You take a big meal of a question – the roots of corruption and violence – and attack it with precision bites. Are we ever going to finish the feast this way?

Ted: It’s the nature of economics research, when it’s done right, to proceed carefully and methodically. So understanding these and other problems will necessarily involve precision bites. But once you understand the economic logic behind the stories we tell, the lessons from Economic Gangsters that can be applied to a broader range of issues and circumstances.

Ray: I also don’t believe it’s right to think about “finishing off” the feast – human society is too complicated for grand unified theories of corruption, violence, or anything else. But each of these contributions will help us chip away at the problem in meaningful ways. In EG, there are many examples of how to connect our findings to potential real-world solutions for development problems.

You link diplomats’ unpaid parking tickets to their nation’s corruption. How random. Where did you come up with the idea?

Ted: A couple of years ago, I was listening to an NPR story about the diplomatic parking problem in New York City while drinking my morning coffee, and I asked myself – are the Nigerians any worse than the Norwegians? The rest is history.

Ray: I always tell graduate students that if they want innovative thesis ideas, to read the newspaper, not the economics literature. This is a case in point. You usually don’t get exciting new research ideas while reading Econometrica.

What was the most unexpected consequence of writing the parking tickets paper?

Ray: The INSANE level of media attention, including in the international press. We had more than 15 minutes’ worth of fame as the “Parking tickets guys.”

Ted: And it’s how we got starting on writing Economic Gangsters. We figured people might also be interested in our other research with a similar flavor, from new ways of detecting Chinese smugglers to unlocking the causes of witch killing in Tanzania.

The most successful young economists of the last five years have been micrometricians – heavily applied statistical wizards. What’s the next big thing for the new generation of grad students?

Ted: The next “big thing”? Alas, it’s impossible to say where intellectual currents will take any field more than a few years down the road. Too many “unknown unknowns”. I personally would be delighted if the new wave of empirical development economics generates some insightful new economic theory, though.

Ray: I actually hope that there isn’t a “next big thing.” Rather, I’d love to see people recognize that different methodologies have their merits: we should be able to triangulate on solutions by using a variety of approaches creatively.

Economists are fond of saying that strong institutions are at the heart of American economic growth. I say they should watch ‘Gangs of New York’ – Scorsese makes Lagos and Nairobi look like kindergarten by comparison. Do we underplay violence and corruption in our own history, and overplay it in Africa today?

Ted: Yes, we could easily have written a book about violence and corruption in 19th century America or Europe. And there are surely lessons to be learned about present-day problems from looking at that earlier era, and vice versa.

Ray: But there are some highly instructive differences. In the 1970s, Sierra Leonian President Siaka Stevens destroyed the railroad in his country’s southeast as a means of weakening an opposing ethnic group, the Mende. Contrast this with the equally corrupt robber barons of 19th century America, who used their power to build railways instead of tearing them down.

ÃƒÅ“ber-blogger Tyler Cowen says that blogs are the new book sales engine. Is one in your future?

Ray: There’s a placeholder for one on the EG website. But right now we’re too busy answering questions on other people’s blogs.

Ted: Plus we hear there’s lots of strong competition from bloggers already writing about violence, corruption and development!

3 thoughts on “Q&A with Ray Fisman and Ted Miguel”