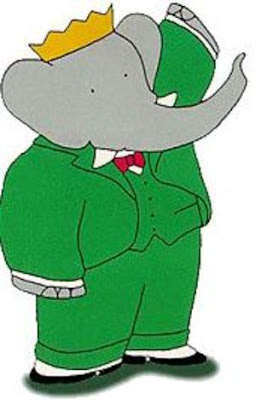 Egad! Could adorable Babar be a tool of colonialist oppression? Adam Gopnik bursts my bubble in a new New Yorker article:

Babar, such interpreters have insisted, is an allegory of French colonization, as seen by the complacent colonizers: the naked African natives, represented by the “good” elephants, are brought to the imperial capital, acculturated, and then sent back to their homeland on a civilizing mission. The elephants that have assimilated to the ways of the metropolis dominate those which have not.

The true condition of the animals—to be naked, on all fours, in the jungle—is made shameful to them, while to become an imitation human, dressed and upright, is to be given the right to rule. The animals that resist—the rhinoceroses—are defeated.

The Europeanized elephants are, as in the colonial mechanism of indirect rule, then made trustees of the system, consuls for the colonial power. To be made French is to be made human and to be made superior.

Fables for children work not by pointing to a moral but by complicating the moral of a point.

The child does not dutifully take in the lesson that salvation lies in civilization, but, in good Freudian fashion, takes in the lesson that the pleasures of civilization come with discontent at its constraints: you ride the elevator, dress up in the green suit, and go to live in Celesteville, but an animal you remain—the dangerous humans and rhinoceroses are there to remind you of that—and you delight in being so.

…Far more than an allegory of colonialism, the “Babar” books are a fable of the difficulties of a bourgeois life.

I think I liked the world better before I read the article.

Here is a New York Times review of the Babar exhibition at the Morgan Library and Museum. Here is an mp3 of Gopnik discussing the controversy.

5 thoughts on “The (well-dressed) elephant in the corner”