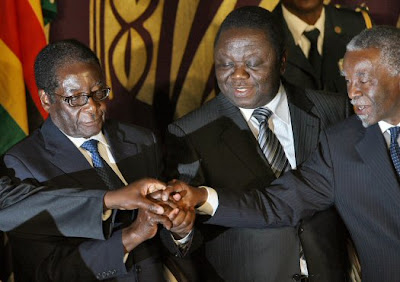 The Guardian‘s editors strike a hopeful note, telling us the money is where the power is:

[Mugabe] retains the army, but the generals will abide by the constitution. The [opposition] MDC gains control of the police, which is vital if elections are to be held in two years time. […]

[Mugabe’s] Zanu-PF are expected to retain control of the prisons and the prosecuting authorities. They fear that prosecutors, unleashed from their control, would do to them what they did to the MDC. But that still leaves the MDC not only with finance (they will be the conduit of the foreign aid package) but also the ministries which spend money, like health and education.

This puts the former opposition movement into a position where power and influence will naturally flow to them. They will be the ones distributing food and relief to the hardest hit rural areas. No longer will Zanu-PF be able to starve villagers into submission. That, in itself, is change.

Then you add the backdrop, as seen in the above video coverage, and it becomes clear: Perhaps nothing but the paper has changed. […]

There were big smiles for the signing, followed by palpable tension. Outside, supporters of each of the two men threw rocks at one another. There’s a long way to go.

Readers: links and pointers to other editorials and analysis?

3 thoughts on “What the future holds for Zimbabwe”