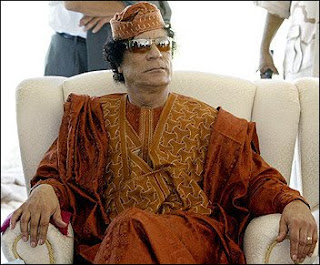 Muammar el-Qaddafi, the man Reagan called the ‘mad dog of the Middle East’, is leading his country out of its isolation. “For the first time in more than half a century,” reports the New York Times, “a sitting American secretary of state is in Libya.”

Bravo. But someone ought to warn Qaddafi against trying for third base on the first date:

Ms. Rice and Colonel Qaddafi met one on one… for what had been billed as a more interesting private exchange than the usual diplomatic meetings.

After all, the Libyan leader had professed his “love” for the American secretary of state. “I support my darling black African woman,” Colonel Qaddafi told the network Al Jazeera last year. “I admire and am very proud of the way she leans back and gives orders to the Arab leaders.”

2 thoughts on “Qaddafi: From mad dog to love hound”