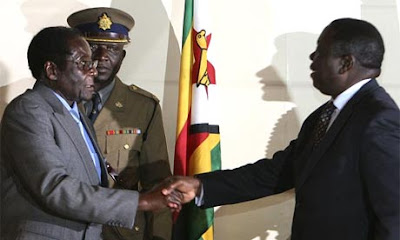 Related to an ongoing debate on this blog:

At their first meeting in more than a decade, Zimbabwe’s president and the leader of the opposition Movement for Democratic Change yesterday signed a five-page “memorandum of understanding” that envisages a fortnight of secret talks by representatives dealing with an array of issues from political violence against the opposition to constitutional reform…

South Africa’s president, Thabo Mbeki, oversaw the signing of the agreement at a Harare hotel after Tsvangirai refused to meet Mugabe at the presidential offices because it would infer recognition of his claim to power.

Mbeki, who is likely to claim the agreement as a vindication of his mediation by “quiet diplomacy”, said all parties wanted a rapid resolution of the political crisis. “It commits the negotiating parties to an intense programme of work to try and finalise the negotiations as quickly as possible,” he said. “All the Zimbabwean parties recognise the urgency of the matters they are discussing and all are committed to trying to complete this process as quickly as possible.”

The full story in The Guardian.

4 thoughts on “The fruits of quiet diplomacy?”