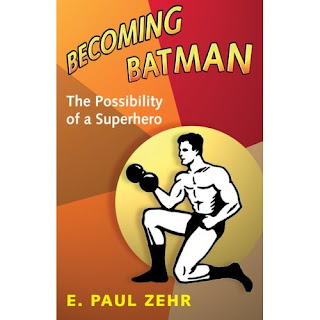 SA: How many of us do you think could become a Batman?

Zehr: If you found the percentage of billionaires and multiply that by the percentage of people who become Olympic decathletes, you could probably get a close estimate. The really important thing is just how much a human being really can do. There’s such a huge range of performance and ability you can tap into.

SA: How would all those beat-downs have affected his longevity?

Zehr: Keeping in mind that being Batman means never losing: If you look at consecutive events where professional fighters have to defend their titles—Muhammad Ali, George Foreman, Ultimate Fighters—the longest period you’re going to find is about two to three years. That dovetails nicely with the average career for NFL running backs. It’s about three years. (That’s the statistic I got from the NFL Players Association Web site.) The point is, it’s not very long. It’s really hard to become Batman in the first place, and it’s hard to maintain it when you get there.

Could there be a Blattman Batman out there? MoLT takes the question to the obvious, most entertaining level:

Albert II, Prince of Thurn and Taxis might be Batman. Here’s what I think he has going for him. He’s young, 24, so he has time to get trained. As royalty, he inherited his wealth. It’s going to be hard for a self-made man/woman to become Batman as much of your energy and attention during your most energetic years is going to be invested in making your fortune, so, like Bruce Wayne, you need to inherit and have time to grow both disenchanted with your position and the means at an early age to divert yourself with the training necessary to become Batman.

I’m thinking that being royalty also exposed Albert to things like fencing, hunting, and other leisure sports that might begin to develop reflexes and skills that translate into those needed by Batman. He has some military service. He is studying both economics and theology which suggests both an intellect and a sensibility that might be drawn to and succeed at fighting against the darker side of humanity – or at least feel like he could/should make a difference.

He’s a championship racing driver, which suggests that he is drawn to risk taking, competition and action and possesses some level of athleticism and good reflexes. Family owns some kind of tech company which could be used to outfit his crime fighting needs. Family also owns 30,000 hectares of German woodland, in which you could undoubtedly hide a hundred Bat Caves. He lives in a freaking castle.

I rest my case. He is Batman.

MoLT is a person with some time on his or her hands. But it gladdens me.

3 thoughts on “What would it take to become Batman? Science has an answer.”