Having spent ten years in big metro areas (Toronto, Boston, San Francisco, New York and DC) I’ve been able to avoid a car purchase. New Haven is a different matter, however, and so I find myself shopping for something more substantial than my little Dahon folder.

With oil on its way towards a gazillion dollars a gallon, I’m thinking a hybrid. Also, my carbon footprint must also look like a small crater, what with my 5 or 6 trips to Africa a year. So I’m thinking a Prius will (irrationally and unjustifiably) help alleviate my carbon guilt.

My father is a certified car nut, and so I turned to him for input. I get the following unexpected advice:

Spoke to my car buddy today about the Prius. He says they generally have a pretty good reputation in the market though he would personally buy a conventional car that offered similar (if not equal) fuel efficiency. In his view, the hybrids suffer from poor acceleration and he also feels there are still unresolved issues around battery safety in a collision and a perceived reluctance by emergency crews in extrication situations because of the dangers posed by the High Voltage system (almost 300 volts on a hybrid [deadly] vs. 12 volts in a normal car). I suspect the latter is a diminishing issue as more hybrids get sold and familiarity increases.

I had several criteria in mind when buying a car. Whether or not an emergency crew will hold back the Jaws of Life for fear of electrocution hadn’t occurred. Like I said, these are serious car people I’m talking to.

(Meanwhile I can barely change a tire. If it weren’t for the family resemblance, there undoubtedly would be stories circulating about my parentage.)

But I digress. My next question to him: are there non-electric cars of similar efficiency? I am pointed to this helpful link from the U.S. government. Among other things, I get this nifty fuel efficiency chart in cities and on highways: 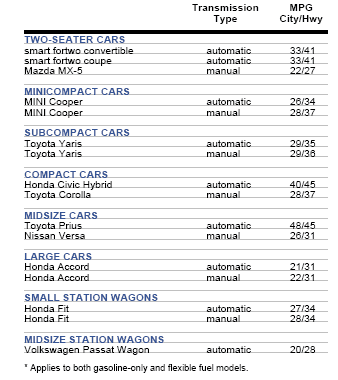 Nothing touches the hybrids, except maybe the Smart cars on highways. (And about the only thing I would worry about more than electrocuted emergency workers is being peeled out of that sardine can of a car. People take those Smart thingees on highways?)

There is also a chart for the gas guzzlers: 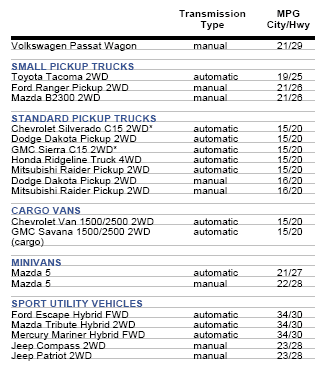 My urban guerrilla friends Peter and Celina have bumper stickers they reserve for SUVs, pickups and Humvees they see parked on the street. They read, “I’m helping to change the environment. Ask me how!”