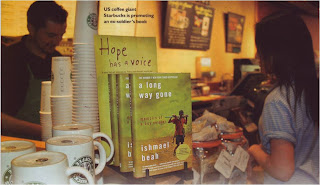 Just days after the author of “Love and Consequences” confessed that she had made up the memoir about her supposed life as a foster child in gang-infested LA, allegations from The Australian that former child soldier Ishmael Beah fabricated his memoirs:

Author Ishmael Beah’s bestselling account of his time as a child soldier was proved factually flawed last night by a document found in a remote Sierra Leone schoolhouse.

The school results for March 1993 showed the popular author attended the Centennial Secondary School throughout the January-March term, a time when he claimed in his heartrending book A Long Way Gone that he was already roaming the countryside as a child refugee.

Beah, his New York publisher Sarah Crichton Books and his Australian co-publisher HarperCollins have furiously denied reports by The Weekend Australian in recent weeks that have undermined the credibility of his highly profitable book.

Beah is estimated to have earned about $1 million from the book, whichhas already sold more than 650,000 copies.

Beah, now 27, did spend some time as a child soldier during his country’s civil war, but it appears likely to have been a few months around the age of 15 rather than two years from the age of 13 that he vividly describes in his book.

The author, who now lives in New York and has been appointed by UNICEF as an advocate for child soldiers, this week dismissed The Australian’s investigations as ridiculous and ill-motivated despite the steady accumulation of evidence that his account of his experiences did not add up.

Assuming these allegations are true, readers should be upset but not surprised. The appropriation of others’ experiences is a standard story-telling device in many oral cultures. It was so with Rigoberta Menchu, and it is so in northern Uganda, where I have worked with child soldiers for about three years. It has been true for a string of American memoirs as well.

We are told what we want and expect to hear when we ask for desperate and tragic tales. The truth is of secondary importance. Moreover, it is the truth–maybe not for that child, but for someone else. And what does it matter?

Well, it matters to a U.S. publishing audience, particularly when someone like Beah persists with the deception on television and radio, and with a massive Starbucks sponsorship and UNICEF ambassadorship. Under a mango tree, an embellishment is one thing. On the New York Times non-fiction bestseller list…

Better, I think, to take Dave Eggers’ approach, who penned a superb novel, What is the What, from the real experiences of a young refugee in southern Sudan. From the preface:

To that end, over the course of many years, I told my story orally to the author. He then concocted this novel, approximating my own voice and using the basic events of my life as the foundation. Because many of the passages are fictional, the result is called a novel. It should not be taken as a definitive history of the civil war in Sudan, nor of the Sudanese people, nor even of my brethren, ,those known as the Lost Boys. This is simply one man’s story, subjectively told. And though it is fictionalized it should be noted that the world I have known is not so different from the one depicted within these pages. We live in a time when even the most horrific events in this book could occur, and in most cases did occur.

I hope Beah’s story is his own, but, I admit, there’s never been a time I believed it could be.