An update from Eric Green.

I am back in Northern Uganda and spending some time in Opit, the IDP camp where I lived and worked for most of 2007. A lot of changes are happening as people transition (or prepare to transition) back to village-based communities. One noticeable difference is that you don’t see many kids wearing colorful school uniforms running around the camp – all of the displaced schools have returned to their original village settings.

New community roads, like the one these people are clearing, are making these schools and villages more accessible. 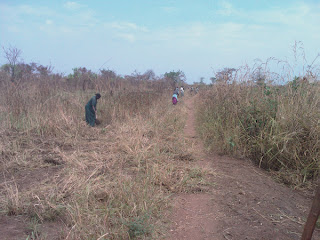 And new economies are developing. I drove past a village market being constructed about 5 or 6 km outside of the camp. I am not an economist, but I see this as a promising sign that future market-based livelihoods will not necessarily be tied to the main camp/trading center.

Another development is a district-wide malaria prevention effort. Workers are in the process of spraying ICON in and around huts in the camps AND villages. One worker told me he thought the effort was funded by RTI, Research Triangle Institute. Sounds like a Durham/Chapel Hill-based company. Anyone? 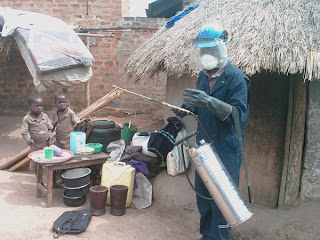 In addition to these developments, unrestricted travel to and from villages has promoted the return of long-overdue social customs such as funeral rites. In the image below, a village outside of Opit prepares to host many overnight guests (small tent-like rooms around the periphery) for a ceremony to honor those who have died in recent years. 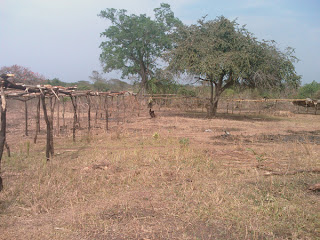 Governments are also preparing to relocate. The LC3 office in Lakwana Subcounty (where Opit is located) is finalizing plans to move into a new building on its original land several km outside of the camp. We provided the Chairman with a map of the camp to decorate the office. 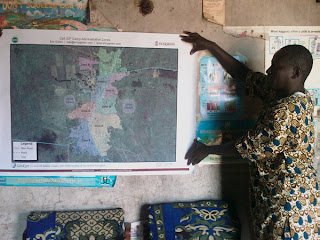 Though unrelated, I had to include this picture and recognize Justin, a new AVSI driver, for a sub-six minute tire change in the heat. Not an easy feat. 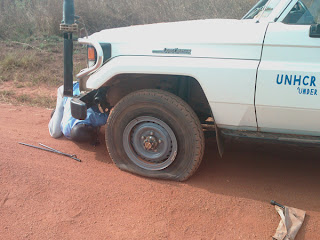 One thought on “Displacement and return in northern Uganda”