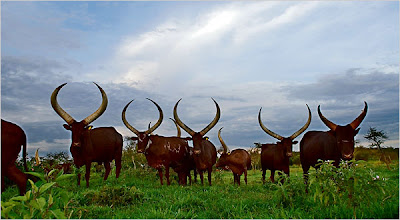 For the latest news on the Ugandan cow, we now turn to The New York Times.

The impossibly long horned Ankole cow is one of the more impressive sights in southern Uganda. And Southerners love their Ankole. Take for example President Museveni, a Banyankole tribesman. He spends the entire first chapter of his autobiography rhapsodizing the Ankole cow–only slightly more space than he devotes to his invasion and capture of the capital city, Kampala. Think Bush talking about brush-clearing and you get the idea.

But back to the Times. It seems that the Ankole is being crowded out by the American Holstein. Among other advantages, we are told, a good Holstein can produce 20 to 30 times more milk than the local Ankole.

Love is so fleeting.

Ugandans got milk. So what is the problem? Well, the world’s food supply is increasingly dependent on a small and narrowing list of highly engineered animal breeds and vegetal varieties. The potential loss of biodiversity is troubling. It could also be disastrous. A single new disease or pest could wipe out the global crop or breed and leave humanity one less food item at a time.

Take the banana–this week The Guardian reports that in 10 years, yes, we could have no more bananas. The banana is “a freakish, doped-up, mutant clone which hasn’t had sex for thousands of years” and it is being hunted to extinction by a fungus.

Almost all supermarket bananas are clones of naturally wild varieties that, as luck would have it, bring us back to Uganda. There, per capita consumption of the banana and plantain has been estimated at 450 kg per year, the highest in the world. Some believe the fruit originates in Uganda, as the country has the highest concentration of different varieties in the world.

So could the Ankole cow go the way of the supermarket banana, in spite of any genetic advantages it may have for local conditions and disease?

Maybe. But the solution is unclear. The Times quotes an agriculture policy adviser at the World Bank, who puts it nicely:

You do have local animals with various kinds of disease resistance and whatever other kinds of things you don’t want to do away with.

But there’s a problem: They are kept by very poor people, and they don’t want to stay poor.”

The American cow is a surprising anti-poverty instrument. NGO’s like Heifer International (no, I am not kidding, it really is called that) widely distributes Holsteins to the poorest throughout the country, indeed the world.

My worry is that a bad year of heat or drought could wipe out Holsteins more than Ankoles, thus impoverishing masses of Ugandans. With higher returns may come higher risk, and when you are living on the margin, an adverse event can be a killer.

What we could use is a better Ankole breed–an argument for more local and decentralized agricultural research, development, and extension services. This is an argument I’ve made before.

I hear that Wolfowitz is looking for a job…