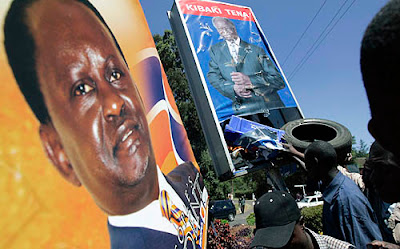 Kenya has seen a string of inefficient and kleptocratic (self-enriching) rulers, and recent weeks have seen a disputed election and tragic ethnic violence. (See my blog posts on Kenya here.)

Kenya is far from alone. The politics of fear, division and violence are a too common feature of African politics (as well as the West’s not so distant past). How is it that weak, inefficient, and sometimes criminal rulers stay in place in a democratic society? Why can they enrich themselves and stay in power? What path charts a way out?

The answer might lie in a little math and logic from Gerard Padro i Miquel, a Stanford political economist.

Suppose we have a society of two ethnic groups: K’s and L’s, each with a K and L leader. Ethnicity is politicized and divided. Suppose also that the leadership succession process is likely to be unstable and unpredictable, and that it can result in a switch of power between ethnic groups. Finally, suppose that a leader finds it difficult to tax or extort from a single ethnic group (say, because he can only tax industries or trade) but finds it easy to dole out pork and patronage based on ethnic identity.

In an NBER paper, Miquel illustrates that these three assumptions alone are enough to sustain a kleptocratic and inefficient regime.

The logic is simple: if a K is in power, members of K’s ethnic group fear the rise of a L to power more than they fear the thieving or ineptitude of the K leader. Even if his taxation or ineptitude undermines the economy, he can direct some of that back to other K’s at the expense of members of the L group.

In this world, it even makes sense for the K leader to torment and abuse members of the L group. Why? Because that enrages the L’s so much that they are likely to take revenge if an L leader ever gets power. This (possibly well-founded) fear gives the K group even more incentive to support their K leader.

This is the politics of division and fear.

Pretty depressing? Maybe not. There might be a way out of such an equilibrium. Miquel doesn’t discuss a way out in his paper, but to me a few options for the opposition leader or the international community exist.

For instance, if the opposition or international community can enforce a more peaceful and stable transition of power (e.g. through better election monitoring), or guarantee safety after a transfer (e.g. through peacekeepers), it will reduce the incentives for the leader in power to abuse his or her authority.

More importantly, if an opposition leader can credibly commit to not taking revenge and to governing the K’s fairly, then the K’s may see fit to get rid of their leader.

The problem is, how does an opposition leader do so? Anyone can make promises, but can they be believed? I imagine an L leader could signal his honest and nonviolent nature by making great sacrifices. Think Nelson Mandela’s 20 years in prison, or Gandhi’s self-sacrifice. No leader who was truly kleptocratic or selfish would ever opt to endure such hardship. By proving they can be better than the current leader, the Mandelas and Gandhi’s of the world erase the uncertainty of the succession.

Unfortunately, Kenya’s opposition leader Raila Odinga is doing exactly the opposite of their example. At best he is not signalling his honesty and non-violence. At worst, the rumors are true and he is helping mastermind a disenfranchisement (or even a killing) of Kikuyus.

If only Raila could do the math.

3 thoughts on “Can mathematics give us a way out of the Kenyan election crisis?”