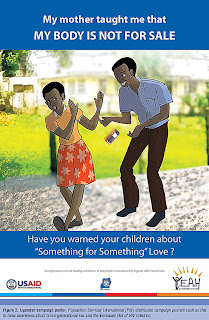 Is the AIDS crisis in Africa perpetuated by transactional sex? Yes, but maybe not in the way we think.

Consider some results from Jon Robinson and Ethan Yeh, who asked 234 women who engage in transactional sex in western Kenya to keep diaries of their trade, as well as other events in their lives. They find that these women use sex work as a means to cope with income risk and adverse events. For instance, on a day when a family member fell sick these women were more likely to see clients and more likely to engage in riskier practices, such as anal or unprotected sex, for more money. On days after they themselves had to miss work due to illness, they were also more likely engage in transactional sex.

If sex work is indeed a form of coping with risk, the policy implication is that assistance for alternative livelihoods, for savings programs, or for insurance schemes could help women reduce their reliance on transactional sex for income. Last time I spoke with Jon and Ethan, they were planning to run and evaluate just these programs. this is the kind of research that makes me thrilled with the future of development economics.

The sex market in many parts of Africa is much less formal than it is in parts of East Asia or in Western countries. The line between prostitution and relationships is rather blurry. In Western Kenya, where Jon and Ethan run their studies, a significant proportion of women engage in transactional sex. Using sex work to smooth income or recover from shocks is not limited to a small number of professional sex workers.

A similar point is made in a recent paper from two UCLA sociologists, Ann Swidler and Susan Cotts Watkins. They argue that we Westerners have a hard time understanding this blurriness, and as a consequence, are failing to effectively combat the spread of AIDS through transactional sex.

…The standard narrative, linking [transactional sex] to prostitution and emphasizing the exploitation of poor, vulnerable women by wealthier, more powerful men, misses a great deal of what motivates and sustains such sexual patterns.

Swidler and Watkins point out that there is a transactional element to most sexual relationships in parts of Africa, from short-term relationships to marriage. Moreover, providing gifts in exchange for sex is closer to a cultural more (and an expectation) than it is a conscious form of exploitation of women by men. In Malawi, they document, gifts are in some sense synonymous with and evidence of love:

The courtship, sometimes brief, begins with words of flattery from the man, perhaps along with a soda or a packet of cookies, and the sexual encounter is typically followed by a more substantial gift (a bar of soap, money to buy a piece of clothing). These gifts are not negotiated as a price but are framed by the man and received by the woman as an expression of “love”.

Most provocatively, they ask just who is the ‘victim’ in such a situation, suggesting evidence that wealthier men experience a great deal of social pressure to support single women economically, receiving sex in return. Moreover, women may actively seek out multiple male patrons in order to smooth their income risk and insure themselves against adverse events such as a family illness. From one (local) perspective, it is men’s money that is “forcing” them to have multiple partners

I personally take this conclusion with caution. Such social norms are not so entrenched as we might think. At root may be the more limited economic opportunities available to women, so that exchanging sex for support (often to offset adverse events) may be their best one among a host of unattractive alternatives. I recently suggested something similar can explain the fact that alcohol brewing is the most common profession among northern Ugandan women, even though males’ consumption of alcohol is associated with greater domestic violence.

However, what this research suggests at the very least is that the line between exploiter and exploited is not so clear, and that the idea that transactional sex is a symptom of women’s exploitation is one (as yet unproven) hypothesis among plausible alternatives.

Moreover, the sociologists find that, in Malawi at least, transactional sex is more common among wealthier (and potentially “empowered”) women than among their poorer and more vulnerable counterparts. This alone should give us pause, and give the researcher’s proposal some serious thought.

What disappoints me about this paper is that there are a number of testable predictions of their hypothesis, and a wealth of data in the form of DHS surveys in a number of African countries — data you can literally download in the next fifteen minutes (although, as I’ve noted before, some of these survey questions should be taken with caution). At the least we should be able to see confirmatory or contradictory patterns.

At best we should consider developing experimental surveys and even programs, much as Ethan and Jon do, to not only confirm or deny such theories, but also find innovative ways to reduce sexually transmitted disease and the status of women.

PhD students take note: there are dissertations galore in this field. PhDs that can help save the world.

2 thoughts on “AIDS and transactional sex in Africa–not what we think?”