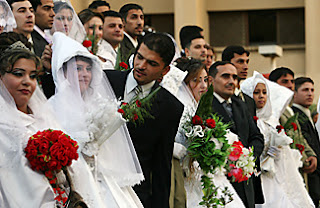 A business tycoon in Iraq is the surprise, last-minute winner of my 2007 award for Most Original, Interesting, and Silly Peacebuilding Attempts:

The two were among 70 couples taking part in a mass wedding in Baghdad, organized by a media magnate eager to send a message that average citizens are a more worthwhile symbol for reconciliation, through basic human rites like marriage, than are the country’s feuding leaders. Washington has been pressing Iraqi leaders lately to embark on bold reconciliation measures in light of the improving security situation.

Fakhri Karim, owner of the Al-Mada newspaper and publishing group, decided
to scour the city for couples from different confessions and ethnicities whose love endured bombs and transcended the sectarian and ethnic conflict that has torn apart Iraq’s otherwise diverse society. He chose couples eager to tie the knot and could benefit from some financial help.

President Jalal Talabani, a secular Kurd and friend and financial backer of Mr. Karim, cheered the idea, which was dubbed the “Joyous Gathering” and cost some $200,000.