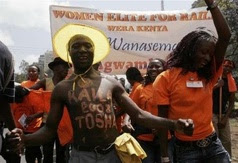 Kenya goes to the polls in four days, and opposition leader Raila Odinga seems likely to win the Presidency. While Kenyan politics are bemoaned as corrupt and tribal, the path it charts is a hopeful one. Steadily, election by election, we are witnessing the kind of democratic development we can only hope will be emulated by its neighbors in the East African community.

Cold War strong man Daniel arap Moi ruled the country for two decades, increasingly the repressive ruler. He won re-election in 1992 and 1997 in part because of the fragmented opposition.
Constitutionally barred from running in 2002, Moi stepped down and his hand-picked successor–the son of the country’s independence leader–stood in his place, and was soundly defeated. Opposition parties coalesced around a single candidate, Mwai Kibaki, and power transferred peacefully to an opposition party for the first time in Kenyan history. I first arrived in Kenya shortly after elections, and the excitement and optimism was palpable.
Kibaki’s rule was by most accounts a disappointment, with too little progress on reducing Nairobi’s crime, national corruption, and development. His political coalition splintered, and multiple parties are fielding candidates in the coming election. The popular opposition leader Raila Odinga has the edge in a close race, according to polls and reporting by the New York Times. Video reporting on the election is here.
What a transformation over just four elections. First, a Cold War strong man is pressured by the West to hold only relatively free and fair elections, and successively outmaneuvers the opposition. Held to a constitutional ban to re-run, his party is defeated and peacefully hands over power. The opposition winner fails to perform and, if all goes well, will either win a narrow victory (hopefully chastened) or himself will peacefully hand over power to a bitter competitor.
We can only hope for the same in Uganda and Rwanda!
The election is not without worries, of course. The Times’ Magazine reports on how the electoral race in the northeast may have become more than just a symbolic battle ground between the West and fundamental Islam.
Many are also concerned that politics remain too tribal in the country. While undoubtedly true, it is easy to overstate the influence of tribalism. Ethnic divisions coincide with linguistic, class, and geographic divides, none of which make good international press or maps into our stereotypes of politics in the dark continent.
Research suggests these collinear factors may do much of the explaining of any such co-ethnic cooperation. James Habyarimana and a collection of co-authors describe the range of linkages and associations that could lead to co-ethnic cooperation in public goods and elections, and weigh what differences mater most with experimental games. Ease of communication (because of shared languages) and social networks play a larger role than the kind of sinister ethnic collaboration and identity we fear and the media plays up.